Here the front of a -still folded- advertisement sheet. It is a postal stationary.

In the left corner you see the emblem of the Empress-Maria-Feodorovna-Institution:
a pelican, feeding her youngs with her blood. 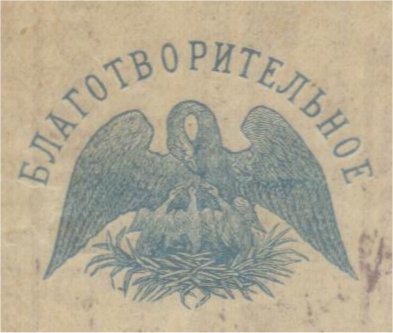 Also in Christian art, is a symbol of charity, it is even a mystic emblem of Christ. St. Hieronymus gives the story of the pelican restoring its young ones destroyed by serpents, and his salvation by the blood of Christ. Physiologus, about the year 200, and the foundation for the Bestiarium of the Middle Ages, tells us that the pelican is very fond of its brood, but when the young ones begin to grow they rebel against the male bird and provoke his anger, so that he kills them. In three days the mother returns to the nest, sits on the dead birds, pours her blood over them, revives them, and they feed on the blood.

Maria Feodorovna (Sophie Dorothea of Württemberg) was the second wife of tsar Paul I and she lived from 1759-1828. She was the mother of tsar Alexander I and tsar Nicholas I. On May 2, 1797 she was appointed as head of the Orphanages. Also when her husband, tsar Paul I was murdered-1801- she continued to work in this function.
The Chancellery (IV Department) of the tsarina continued the charity work also after the dead of Maria Feodorovna.
The Chancellery sought ways to raise funds and so in 1898 the Chancellery launched the issue of ‘Charity letters in favor of orphanages’. The post-offices sold it for a reduced price, but had the money for the advertisements. The extra profit was for the orphanages, named after tsarina Maria Feodorovna (1759-1828). On the front of the sheet is placed on the left side the above mentioned emblem and the text above the emblem means ‘charitable’.
On the front upside in red ‘This form is is sold everywhere for 5 kopecks’ Then: ‘Closed letter with advertisements’ and at the bottom: ‘The net proceeds go to the benefit of the departemental institutions of Empress Maria’. 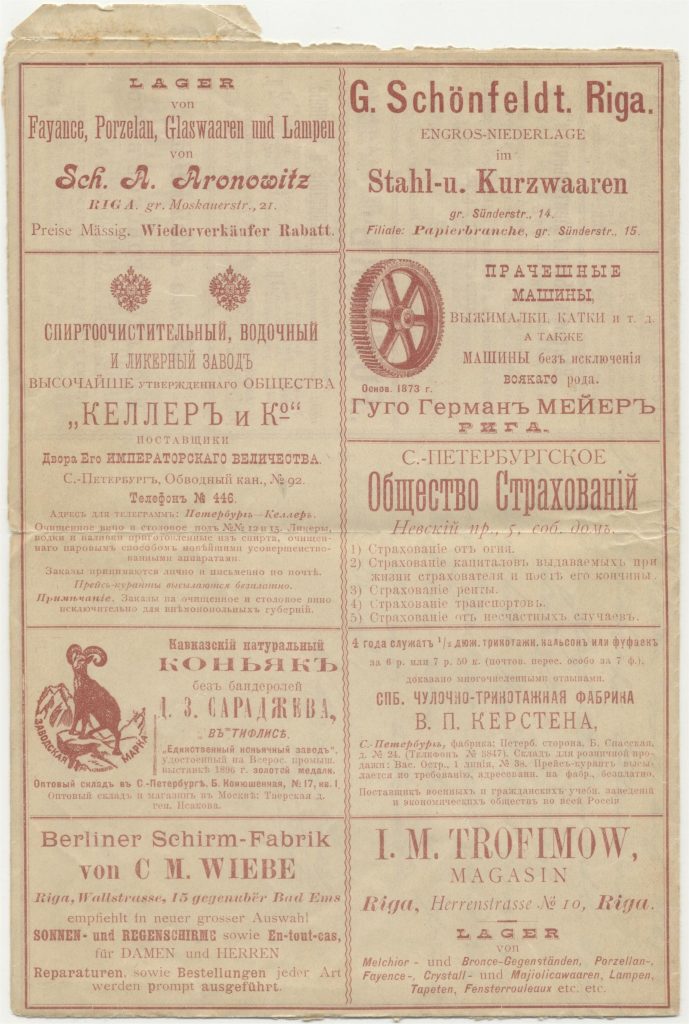 In the beginning the Head office in St. Peterburg was the collecting point for the advertisements. Later there were sub-offices, which get the same function.
The Head office had to buy the postal sheets from the State Printing House. The address side was printed in advance by the State Printing House, included the imprinted stamp (5 or 7 kopecks) and the emblem with the pelican. Thw Chancellery of the Empress ordered postal sheets for more series together. Arnold Ryss has concluded -from the printing characteristicts -the used colors- that the most sheets are printed in St. Petersburg.
The advertisements were -most cases- printed in one color (blue, violet, red or green).
An article in Rossica gives a calculation for the proceeds:
the cost of printing: 1 kopeck
prepayment: 5 or 7 kopecks
for the Empress-Maria-Feodorovna-Institution: 1 kopeck per sold sheet
Total: 7 or 9 kopecks, but the prize was 4 or 5 kopecks. The difference must come from the advertisements. When the advertisements had not results enough for the advertisers: end of these very special postal stationeries.
The advertisement sheet, here to see, is a ‘normal’ sheet. There are also sheets reported with deviations: advertisement sheets without printed address side, a proof (?) without imprinted postage stamp on the address side. Further of course there are typographical errors in the advertisements and -in some sheets- errors in the year of issue.

As you can see here and above the letter sheet has as most letter sheets two narrow gummed strips for sealing the envelope.

Then you can open again-second time:

About these charity letter sheets:
a nice book of Arnold Ryss, 220 pages in color. The book gives background and is also a catalogue, based on the prized exposition of the author:
Charity letters bearing advertisements for the benefit of orphans (1898-1901) / by Arnold Ryss. – Moscow, Russia, published 2004 in English. – Review in Rossica 2006 ; 147. – p. 88.
The introduction gives an overview (thanks to the library of Rossica!).

Then you can open again-third time, the left side: 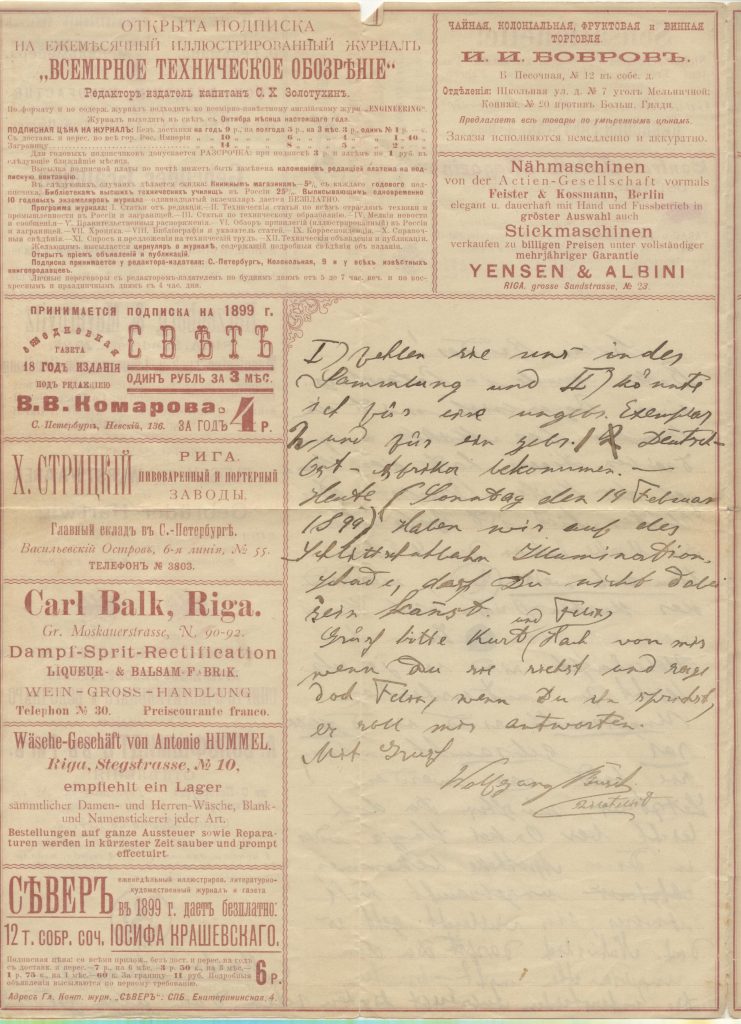 And the right side: 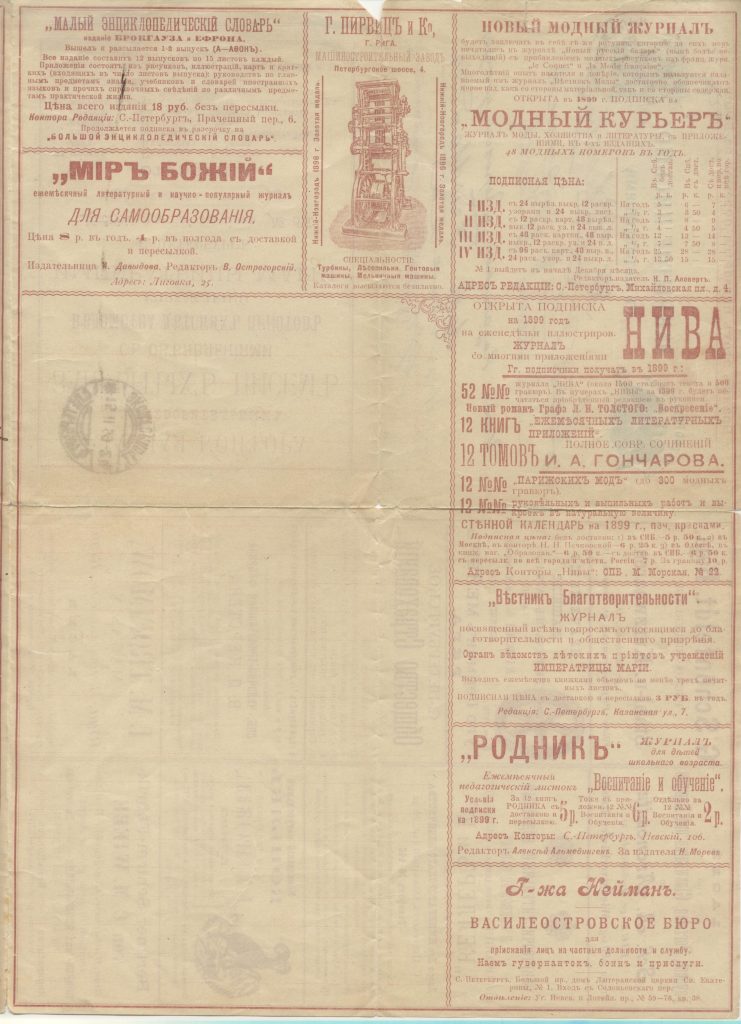 The sheets are issued in three numbered series, it are also three types:

In the first article of Adler/Schmidt is described the transition of intercity letter sheets: from the first type (7 kopecks stamp of the 1889 regular issue) and type 3 (7 kopecks as postal stationery envelop Mi. U 33). The transition has gone without interruption. Series 5 (type 1) and 6 (type 3) have permission of the police on the same day. Even type 3 can be found on series 5.
This during actual printing has -according the article- an interesting reason:
Some smart characters cut out the embossed stamp and used it on covers as regular postage. The price of the sheets was 5 kopecks, so they saved 2 kopecks.
It was legally prohibited to use cut-outs from entires, but it was done. With type 3 it was clear that it comes from a postal stationery.

For the collectors of the Baltic the advertisements in sheets, issued in St. Petersburg, are interesting. Many advertisements are from companies in Riga and (also) in German.

Also on this letter sheet: on the front upside in red ‘This form is is sold everywhere for 5 kopecks’ Then: ‘Closed letter with advertisements’ and at the bottom: ‘The net proceeds go to the benefit of the departemental institutions of Empress Maria’.
Type 3 as the sheet above: imprinted stamp of 7 kopecks -intercity letter sheet- , like on the postal stationery U 33. 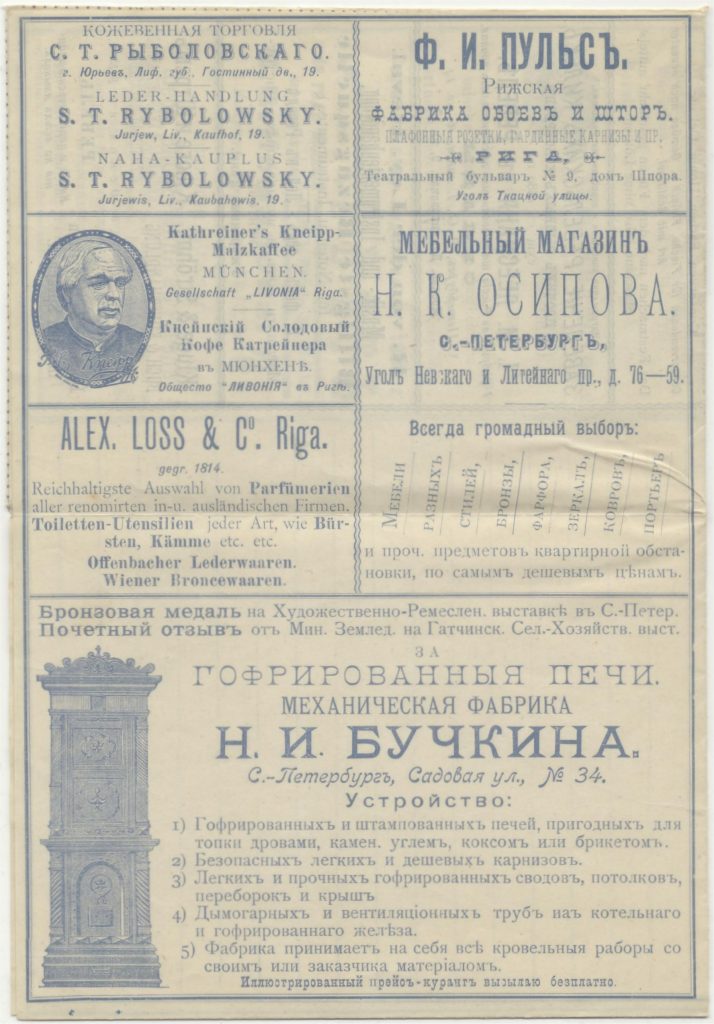 On this page an advertisement of Kathreiner’s Kneipp-Malzkaffee (coffee) is placed. Still you can find it as brand on internet: ‘Kneipp Kathreiner Malt Coffee’ or ‘Kathreiner Kneipp Malzkaffee’, a replacement of real coffee ‘made of the best Austrian quality barley’. About this factory on internet: Auslandstätigkeit von Kathreiners Malzkattee-Fabriken. – In: Weltwirtschaftliches Archiv 10. Bd., (1917), pp. 376-378. See: www.jstor.org/stable/40411472

The advertisement of S.T. Rybolowsky -placed on this page at the top, left- is in three languages: Russian, German and Estonian (Naha kauplus=leather shop). The place is indicated in Russian as ЮРЬЕВЪ [YUREW]. Here the German indication of the place is more a transcription of the Russian name: Jurjew Liv. (short for Livland = Livonia). The usual German name of the plave in tsarist times was Dorpat, Derpt or Dörpt. Also the Estonian indication of the place is more a transcription: Jurjewis. Noe the Estionan name is Tartu.

Then you can open again-second time, the format is now about A4:

Above you see the advertisement of the ФАБРИКА [FABRIKA], factory, АНГЛIЙСКИХЪ [ANGLIISKIKH], English, ЛАКОВЪ И ИКРАСОКЪ [LAKOV I IKRASOK] , paints and varnishes, the company C. King in St.Petersnurg. Left the address in S. Petersburg is mentioned, in the center, so it is probably an office or warehouse (‘sklad’), with branches in Moscow, Odessa and Warsaw. At the top, right side, the varieties of paints are mentioned.

Then you can open again-third time, the left side: 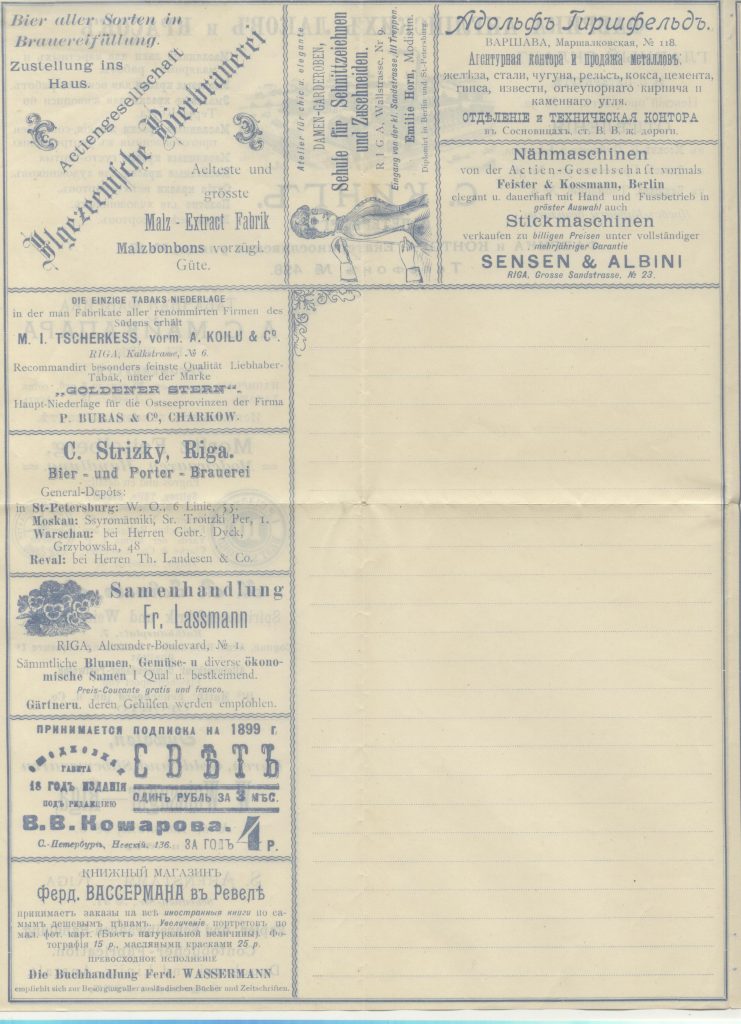 Here an advertisement of a brewery is placed: Strizky. The very known brewery Strrizky, opened in 1854 on Nikolaev street 75/77 (nowadays A.Briana), was in 1913 the greatest and most profitable in Riga, excluding the Ilguciema brewery.
In a message, October, 1918 the cost of the evacuated equipment from the brewery is mentioned: about 165 000 rubles. The factory equipment was taken out to Moscow, but has subsequently disappeared.
More about this brewery: http://www.valdemarapasaza.lv/en/history.

In the right column some advertisements are placed by companies in РЕВЕЛЪ [REVEL], now the Estonian capital Tallinn.