Already in tsaristic times the seaside places west of Riga were very popular destination for leisure activities: a nice combination of beach and pine forest.

The card with the text “Mondnacht am Strande von Majorenhof” (Moon-night at the beach of Majorenhof) is written in Edinburg: 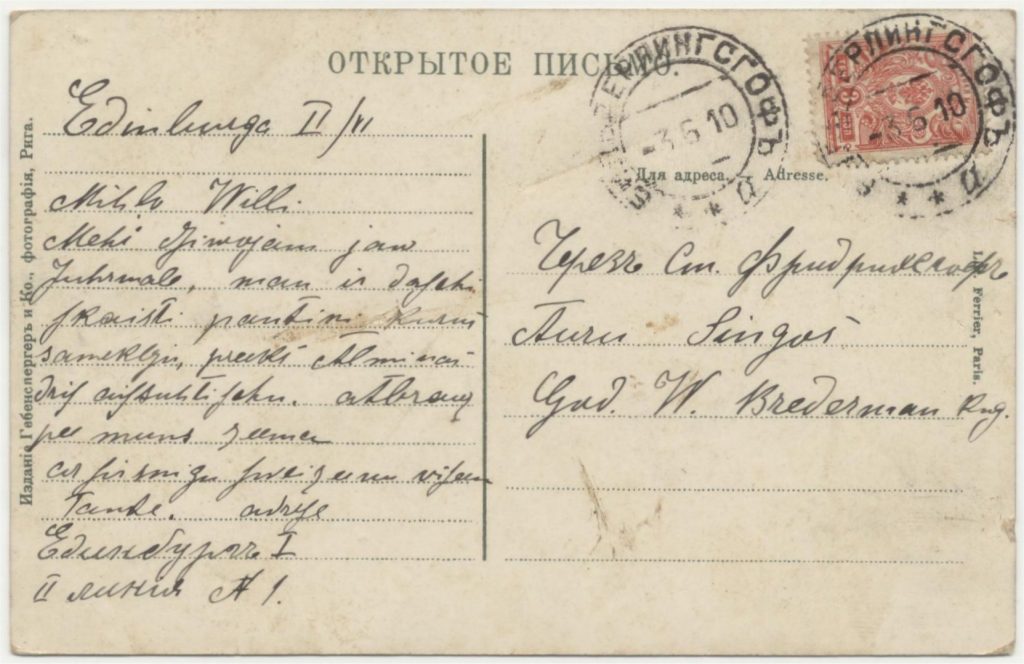 Address-side of the card above, written in Edinburg and sent from  Bilderingshof in 1910.

The postmark must be БИЛЬДЕРЛИНГСГОФЪ (BILDERINGSGOF). In German the Latvian place Bulduri is indicated as Bilderingshof. The Russian name is more a transcription of the German name, Bilderlingshof.
All the mentioned places, Edinburg (Dzintari), Bilderlingshof (Bulduri) and Majorenhof (Majori), are located on the map below near each other on the coast near Riga. The map is from Baedeker (1914).

Jūrmala
The places on the maps here, from Bilderlingshof in the east to Assern in the west, now are part of the city Jūrmala. This name means ‘beach’ or ‘seashore’. The area was formerly a part of Riga, and was also indicated as ‘Rīgas Jūrmala’, Riga-on-sea, in German Riga-strand. In 1959 the city of Jūrmala is composed of Kemeri, Jaunkemeri, Sloka and the places of Rīgas Jürmala. The town district Majori can you see as the centre.

Ķemeri is now an important part of the city. It was in Imperial Russia already important for its curative springs and mud baths. This place will get attention on another place of this site.

On middle detail-card – from the Baedeker 1912 – we see the three little places, Majorenhof, Edinburg and Bilderlingshof lying, on a row, jammed in between the sea and the river the Aa. On the Aa could be sailed. The Aa, on the map here the `Kürische Aa’, is in Latvian the river Lielupe.

The card above is sent from Riga to Perm.

On the card is placed a one-circle, ‘cross-date’, postmark of МАIОРЕНГОФЪ (MAIORENGOF). In the postmark is also indicated the government: ЛИФЛ. (LIFL.), Livland, and -with some resize in the computer Г (G), short for Gubernya, Government.

About Majorenhof (German edition) Baedeker 1912: one hour by train from Riga, distance 22 werst. This is something more as 23 kilometer (1 west is 1,067 km.). Also there was going a steamboat to.
Baedeker -English edition 1914- about Majori:
“Majorenhof is the most crowded and popular of the resorts on the Riga coast. Those who wish quieter quarters should select the See-Str.in preference to the lively Johman-Str. Among the visitors are many Russians. Boating may be had on the Aa, but caution must be observed with sailing-boats.”

Majori is bought in the 17th century by the family Fircks and the area was to World War I property of this family. The estate was mid 17th property of major Fircks, major in Polish service and very proud on his title: Majorenhof. The area is divided in parts for building summer-houses.

The sea-pavillion is build in 1909 and designed -in historicism style- by A. Medlinger.
A famous guest of the pavillion was King Gustav V of Sweden, who came on a visit in the summer of 1929. The building is still there -Tirgonu Iela 1- and is now a private house.
In 1877 the railway-line between Riga and Tuckums -via Majori- is completed and then the ’tourism’ was well under way. Majori became one of the most lively centres on the coast. Cards from Majori and other bathing resorts in this area have more often a railway postmark. This card has been given on with the mail wagon of the train Riga-Tuckums, the line along the coast direction Riga, and has the postmark РИГА – ТУККУМЪ (RIGA TUKKUM), Riga-Tuckums. The card goes to Riga and has a 4-lines machine arrival postmark of Riga.

From a photo-guide -in Russian:
ВИДЬЫ РИЖСКАГО ВЗМОРЬЯ [Pictures of the coast-area near Riga]
2th Ed. – Riga : Ernst Plates, ca. 1910.
From the -Russian- introduction: ‘The fame of the area is steady growing for anybody, who is known with the healthiness of the sea water and sea air.’

Greetings from Majori.
This card is sent from Riga -one-ring cross-date postmark- to Hilversum (13 December 1902) in the Netherlands. The card shows some pictures from Majori:

The pictures on this card:
Hom’s Hotel in Majori is build in 1870, with a garden -very famous- for concerts. The music life was concentrated in Majori. Symphony orchestras from Berlin, Prague, and Warsaw used to give concerts here. In 1896 the first cinema in Jurmala was opened at Hom’s hotel. Here also is given the first concert of Latvian music in 1905. The buildings burned down in 1913.
In Majori the first sanatorium in this area is opened in 1870. The sanatorium – Marienbad- was a initiative of Dr. Johann Christian Nordströ. Patients were served there with physiotherapy and ‘climate-therapy’. In World War II the main building is destructed and later rebuild. The tower, the extension of the gallery and the entrancetower stay unchanged.

Edinburg – present name Dzintari- was given this name in honor of the Prince of Edinburgh, who married the daughter of Tsar Alexander II. The couple has here also visited the Kurhaus. In 1897, a Kurhaus with sea-avillion is built here. Edinburgh was among the aristocrats loved, also for romantic adventures.

As many cards the text -here on the picture-side- on the card is German, but difficult to read:
“Liebe Rosel, lieber Adam! Rosels Karte habe ich mit Freude erhalten, zumal mein Geburtshaus darauf ist, hat sie mir grosze Freude gemacht. Im August also werdet Ihr in Berlin sein.
Na, dann viel Vergnügen ! Liebe Rosel, Bilder habe ich keine von mir hier, aber in nächster Woche werde ich mir welche machen lassen, da bekommt Ihr eins von mir.
Grüszt Onkel und Tante recht schön von mir und Euch viele Grüsze von Euere Cousine Elisabeth.”
Translation:
Dear Rosel, dear Adam! Rosels card I with joy have received, especially because my birth house stands there on, this has given me large joy. So in august you will be in Berlin. Now, much pleasure then! Dear Rosel, photographs of me do I not have here, but coming week I will let make some, then you get there of me. Greet uncle and aunt right warmly of me and you many greetings of your cousin Elisabeth.

The beginning of the 19th century can be seen as the starting point of the spa town of Jurmala: the Russian army sent wounded from the war against Napoleon to Dubulti.

In the fishing village Dubbeln, in Latvian Dubulti, mid 19th century were built the first summer houses. The first hotel in this area was built in Dubulti in 1834. Also in Dubulti a Kurhaus  is built with a large ballroom in 1846.

There was a landing place and in 1844 the first steamboat carried 150 guests at a time. Later there were five steamers in service from Riga and Jelgava. The ‘Undine’ was the greatest and could carry 500 guests. For the organization of services for the guests, Dubulti in 1851 founded the first ‘Resort Organization was founded in Dubulti in 1851. There was also a precursor since 1840, a ‘Committee of holiday makers’.
Baedeker -English version 1914- about Dubulti:
“Dubbeln, the oldest of the Riga bathing resorts, is (like Majorenhof) very noisy; among the visitors are many Jews. The Kurhaus is the centre of activity.”

With the circular no. 53 of 12 April 1860 were introduced the new standard-postmarks in whole Russia. These postmarks are -as we see on the letter above- one-ring postmarks with the date on three lines: day in arabic numerals, month in cyrillic abbrevation, year in four arabic numerals.
On the card here below is used a new postmark of ДУББЕЛЬНЪ [DUBBELN]: double-cross-type. 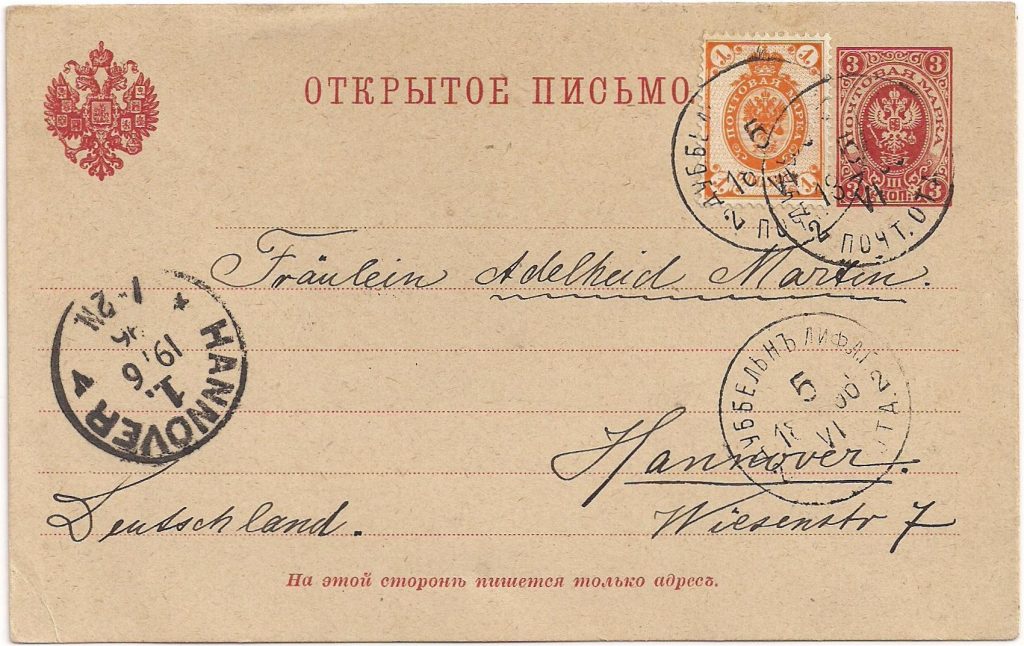 In circular 13 of 5 April 1890 the instruction arrived to use Roman numerals for the month in new postmarks. This happened on suggestion of the U.P.U., the Universal Postal Union. Also the postmarks in Russia change in the ‘crossed date’-type. In the middle the day stays first, under it the month (in Roman numerals), left of the whole the century and right the rest of the year. On the card below is used another postmark: double circle.

Karlsbad -with Kurhaus- and Assern, the westernmost of the larger resorts near Riga were simpler and quieter, in 1912 at least.

In the late 19th century mostly no swimsuit was used by men . Women wore a shirt that covered the body from the neck to the ankles. From a beach buggy they went into the water. Nude bathing was only allowed if you had a carriage with a tarp before. Men and women were separated from each other when bathing.
At the beach of Majorenhof -and the other resorts- were times set for the visit:
“ohne Badeanzug bis 10 Uhr morg. Männer, 10-1 Uhr Frauen; mit Badeanzug 1-3 Uhr Männer, 3-5½ Uhr Frauen. Bad 10 kop. Die strandpromenade ist von 1 Uhr mittags freigegeben.” (Baedeker 1912, p. 61).
At the beach huts were built, where people could change and jetties from where you could easily get in the water without wading. Some places also had bathing carriages to drive people into the water.

The address-side of the card above: