On the address side of this card is -bilingual- mentioned: ‘LATVIJAS PSR. RĪGAS JŪRMALA’ . Also the художник (=artist) is mentioned here. 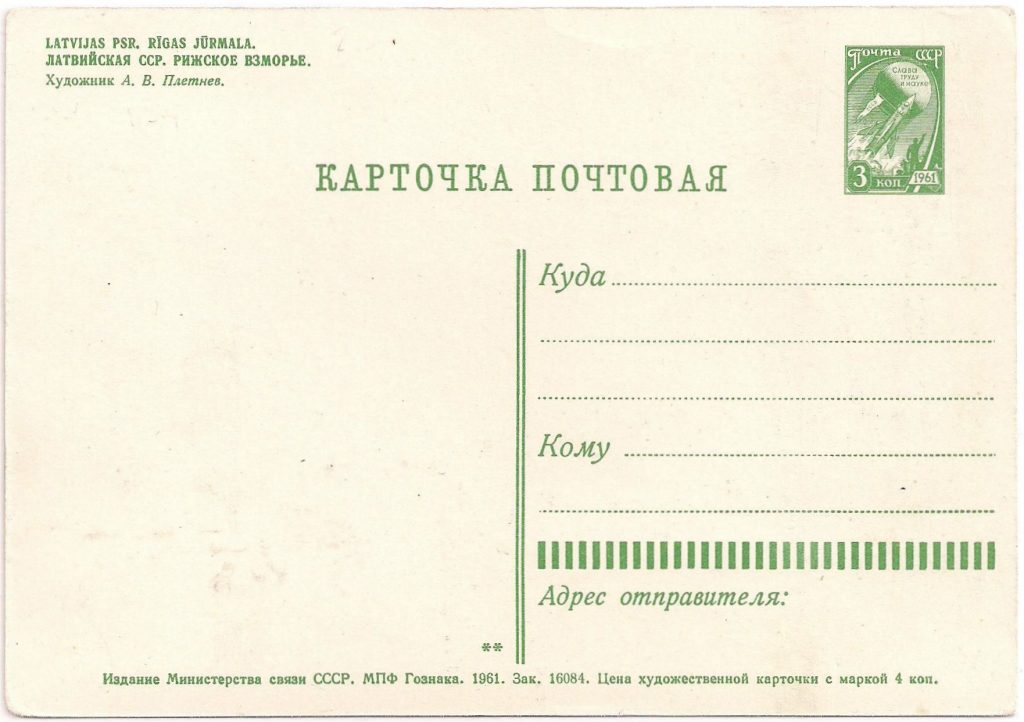 On the lower edge we see the printing data.
The card is issued in 1961 and printed in the МПФ ГОЗНАКА, short for МОСКОВСКОЙ [MOSKOVSKOI] ПЕЧАТЉОЙ [PECHATNOI] ФАБРИКЕ [FABRIKE] ГОЗНАКА [GOSZNAKA], Moscow Printing Factory Goznak.
Number 16084 is the number of the ЗАКAЗ [ZAKAZ], order.
As imprinted stamp is used a stamp of the 10th set permanent franking stamps, with the year 1961: a starting rocket.
This imprinted stamp is used in four types:
Type I: Typography: lines in the background and moon are at a greater distance from each other
Type II: Offset: background and moon with finer lines
Type III: Offset: background with finer lines, moon without lines
Type IV: (grid) gravure: background and moon in a grid
This postal stationary with МПФ ГОЗНАКА and imprinted stamp Type II is in the Michel P 285, subnummer III (only year, not a number starting with A in the printing data.).

After the printing data on the lower edge is mentioned: ЦЕГА ХУДОЖЕСТВЕННОЙ КАРТЧКИ Р МАРКОЙ, Price of the artistic card with imprinted stamp. And that was 4 kopecks. In 1946 Rīgas Jūrmala is added as 7th district to Riga. Ķemeri and Sloka were -and continued- autonomous. In 1959 Jūrmala became a city, including Ķemeri and Sloka.

Rīgas Jūrmala was long been associated with health resorts, sanatoriums and spas. On this postalstationary is mentioned a sanatorium in Bulduri.

On the backside of the postal stationary are the printing data indicated.

“Juras Perle”, Sea Pearl, was a famous restaurant on the beach of Bulduri. It was build in 1965, the architect was Josifs Goldenbergs. On the first floor was also a nigh-bar.
Unfortunately it burned down in 1991, in 2001 the remnants were removed.
On this card -postal stationary- you see a nice picture of this building. 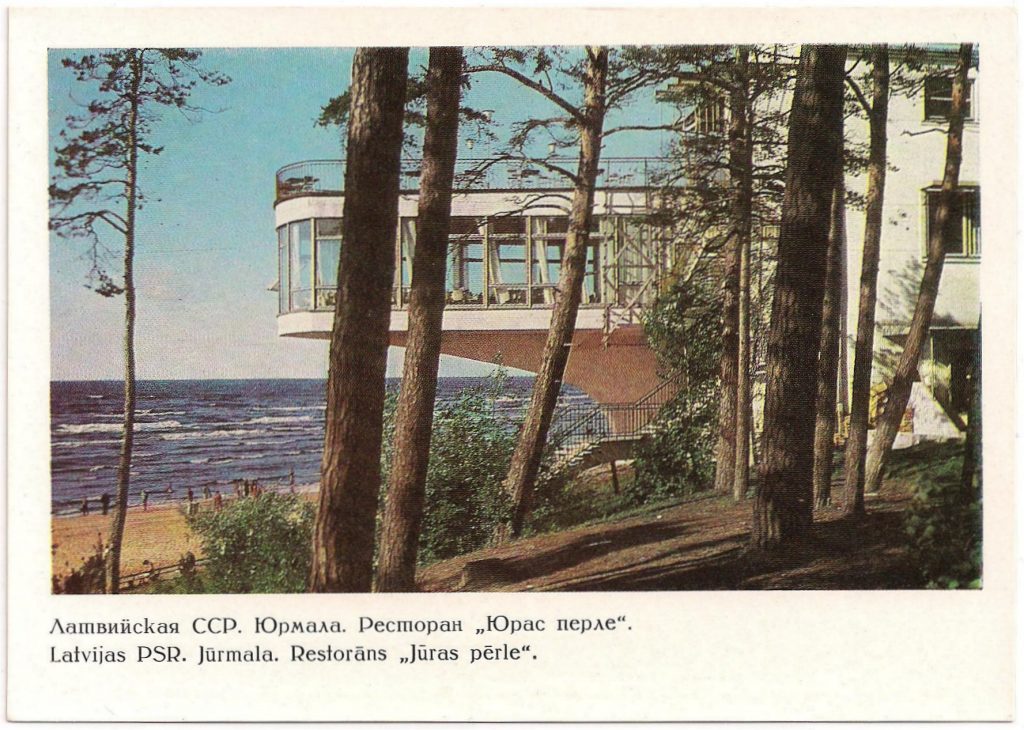 The other side of this card: 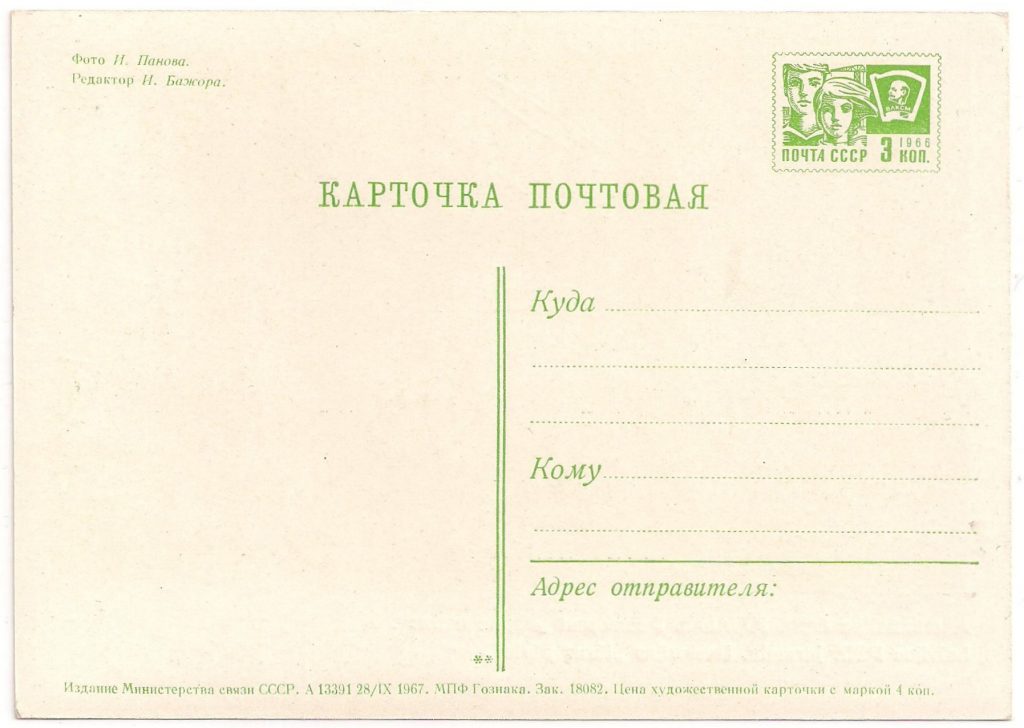 As imprinted stamp is used a stamp of the 11th set permanent franking stamps, with the year 1966: a young boy and girl (3 kop.).
This imprinted stamp is used in two types:
Type I: Typography: shading on the shoulder of the girl has a break (triangle), with box and with ‘imprinted’ perforation
Type II: Offset: shading also a break, but only 0,5 mm, withhout box, with box and with ‘imprinted’ perforation

The card below has the other type imprinted stamp: 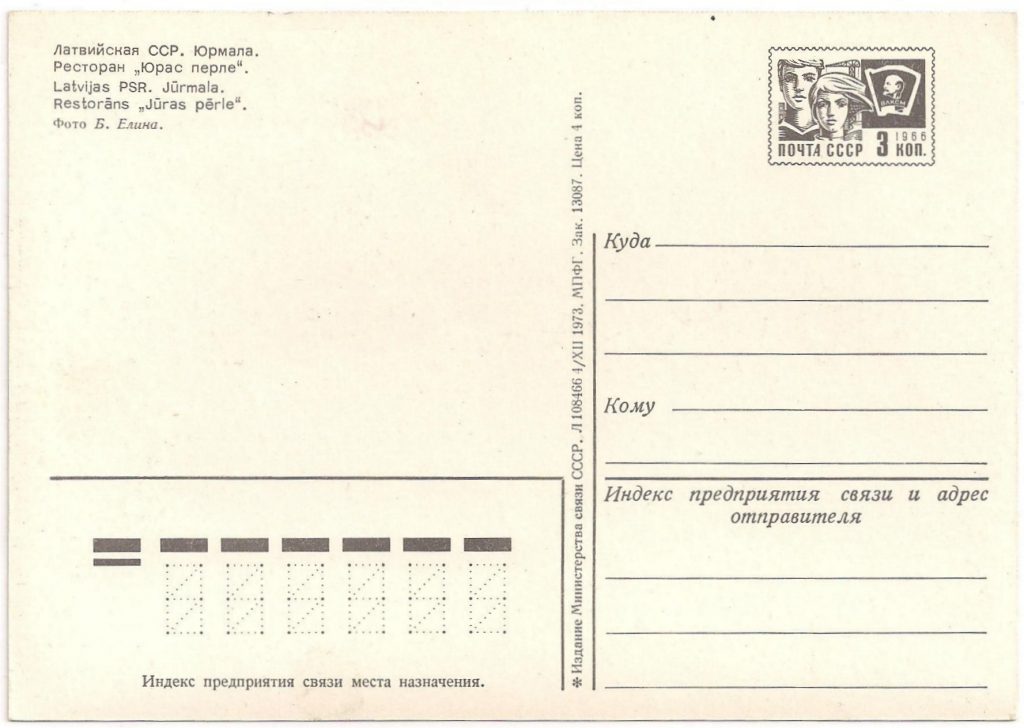 This card is issued December 4, 1973. As imprinted stamp is also used the stamp of the 11th set permanent franking stamps, with the year 1966: a young boy and girl.

On this card – is used stamp type II: offset: shading also a break, but only 0,5 mm, with imprinted perforation.
The face of this card above, also “Juras Perle”: 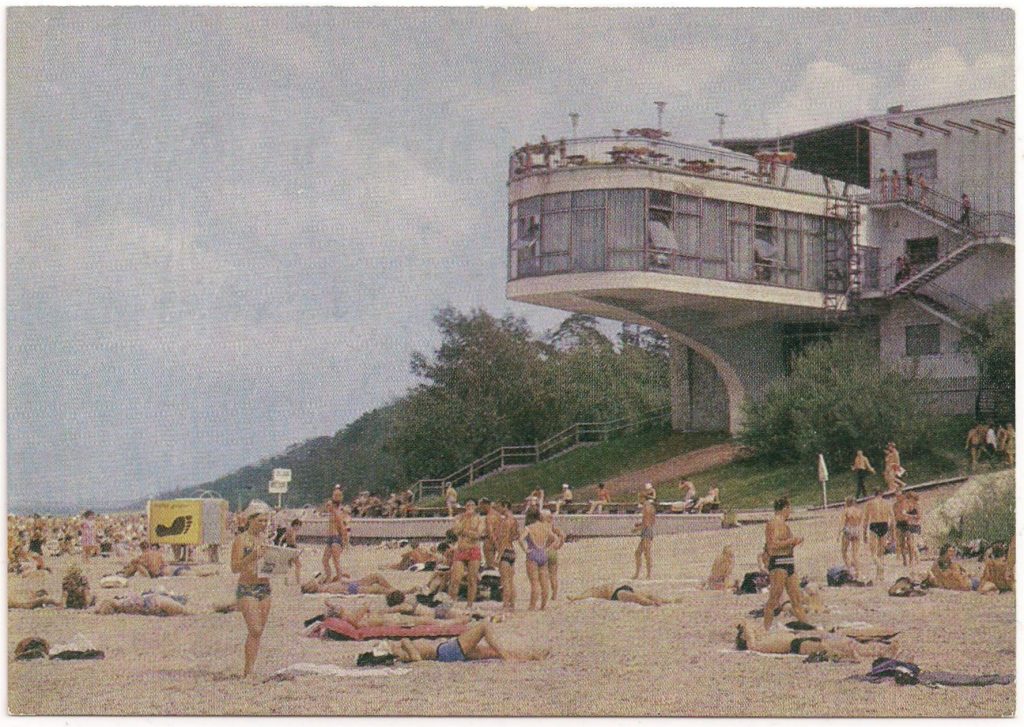 On this card we see the field for postal code: Michel P360-397. There are different types postal code fields. Above the six input field are a row bars and before these a start-indication. Here field-type III: the two bars of the start-indication are on the same level as the other bars.

Here clearly Type IIIA on this card: thicker corner points in the input fields. This card with field for postal code type IIIA belongs according the schema in HBG 60 (p. 22) to the cards P 378-P397. Between the left and the right side is a breakline: the lines of the address and sender are separated from the breakline. So the card must be classified between P 378-386, the imprinted stamp type II, offset, so P379-386. The text under the input-fields of the postal code is placed something to the left (not right underneath): so between P 379-382.

Majori,  with a railwaystation 24 km from Riga, was also in the Sovjet period center of the spa life, so there are many cards and covers -postal stationery- with pictures of this place.

On this early card: Majori Viesnīca, Majori Hotel. Here below the other side, with the printing information: 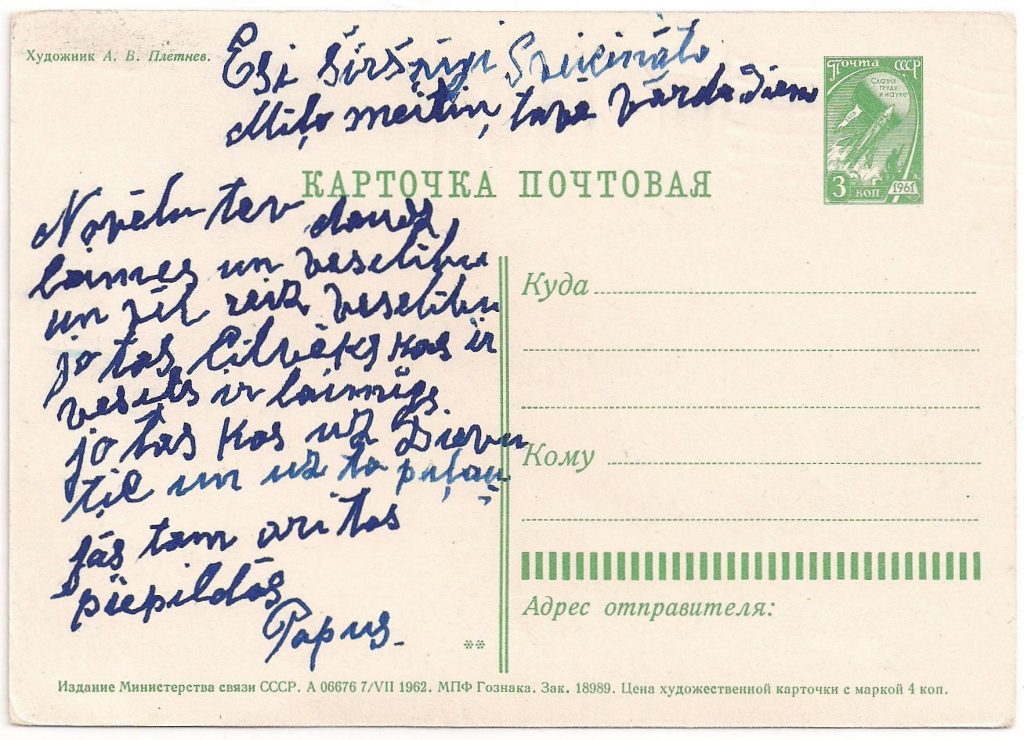 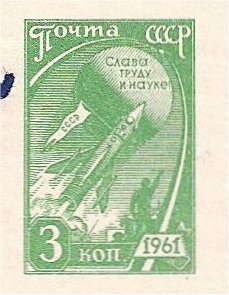 Number 18989 is the number of the ЗАК [ZAKAZ], order.
Cards with this indication of printing house, imprinted stamp type II, offset, color on addres-side green/white: must be Michel P 285.
A scheme of the cards with the imprinted stamp of the 10th set permanent franking stamps, with the year 1961 (a starting rocket): in the article ‘Postwaardestukken uit de sovjetperiode : ansichtkaarten (HBG 60, p 16).

Of course it is nice to stay in the famous hotel “Majori” and sent a postal stationary with this hotel.
This hotel was built in 1925 under the guidance of the architect A. Medlinger in ‘Art Nouveau’stijl (or “historical-me’ style). In the crisis of 1932, the hotel was to be auctioned. The valuable interior was partly moved to Sigulda castle. In 1991 the hotel was renovated.