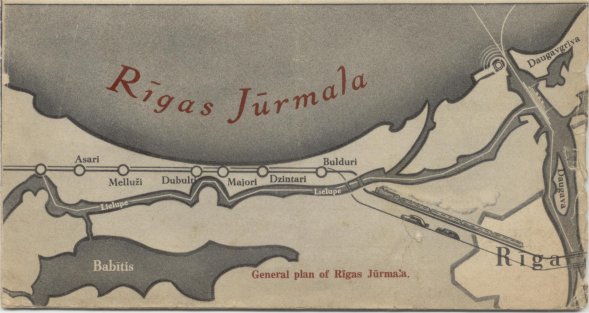 Map on the backside of a tourist brochure -in English- from the thirties [?]: ‘Rigas Jūrmala : ideal bathing-place at the Baltic Sea’

The Guide “Der Rigasche Strand” (The Riga Beach) -a little bit later in the Twenties (c. 1928) – speaks of 50 to 60.000 guests (10% foreigners).This is not yet the number of pre-war-120 000. From Riga to many trains ran during the summer, 36 to Rīgas Jūrmala and back daily. There was also a steamboat connection and a first class road between Riga and the beach.
The guide also provides general information for the -German- tourist and an extended description of the places on the “Baltic Riviera.”

The first ‘beach-station’ of the railwayline from Riga was Bulli, 30 minutes (18 km) from Riga, one of the two stations of Bulduri. Two kilometre away the railway station Bulduri was located on this line.
Bulduri had good hotels, sanatoriums, hostels and public houses. In the ‘Kurhaus’ were given symphony concerts.
There was a post office opened in 1907. The Latvian post office was opened 21.06.1919.
The card above  shows the usual Latvian postmark of Bulduri. This postmark is known with two different serial letters,  A (with 7 bars) and B (with 9 bars). After enlarging with the computer the postmark of this card has serial letter A. The picture-side shows a picture of the beach. 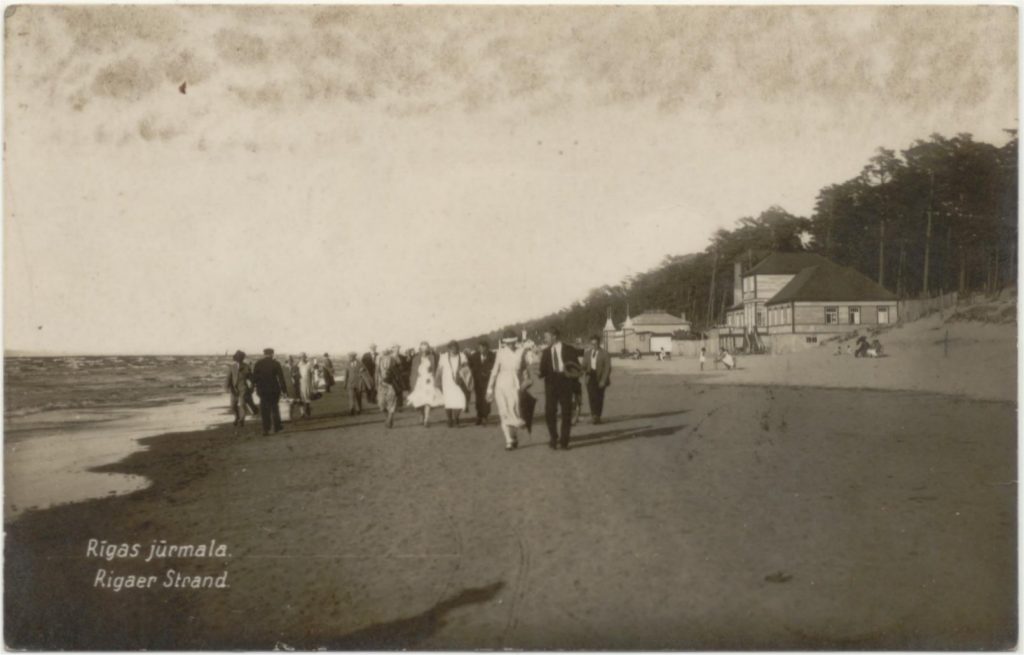 An older postmark is used with the indication BILDERLIŅI – serial letter a- and in this name is to recognise the old name Bildeeringshof. This type postmark – type 1, according the book of Harry v. Hofmann – has as characteristics: double circle, place at the top, below Latwija, serial letter on the right, ornament left, no bars. Even older are the provisional postnarks (16-7-1919?), used at the start. In Bulduri is also a single-ring postmark used with the written German indication ‘Bilderingshof’ and a written date. Also a singlering-postmark is used with the written Latvian indication ‘Bilderlini’ and written date. From 30.05.1920 the name of the post-office is Bulduri. 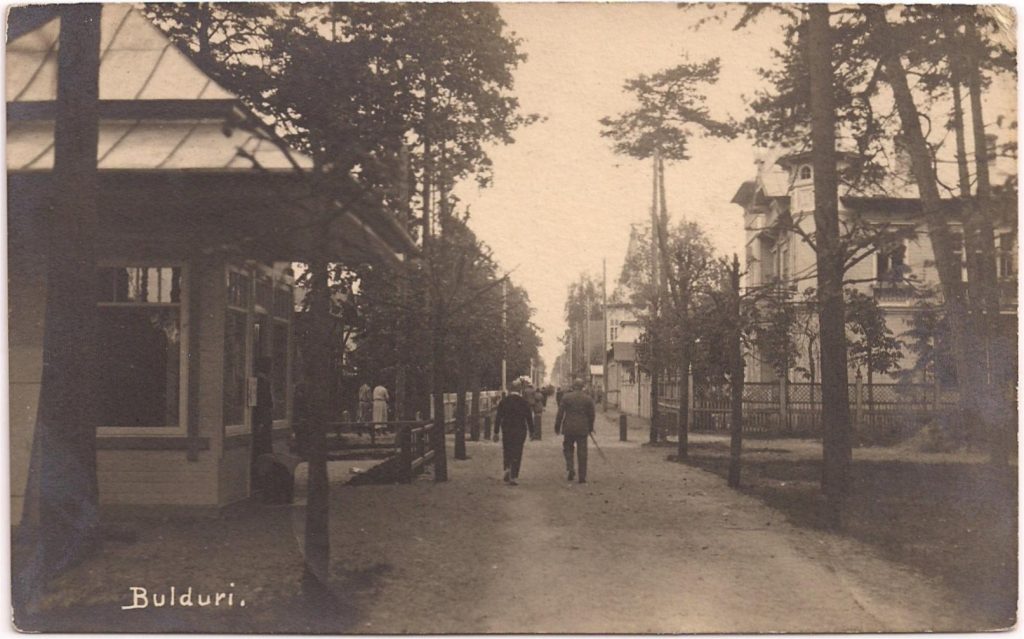 Picture postcard with a view from Bulduri. 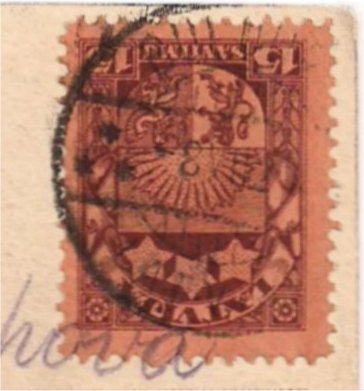 The card is sent from Bulduri. The postmark is not clear, but the card is written in 1927.
The card is sent to Czechoslovakia, so 15 s. is the correct rate.
Between February 1, 1925 and April 1, 1928: international postcard 15 santī. An overview of the postal the rates of Latvia 1918-1945 on internet: site of Sijtze Reurich

Mostly the post from this area are picture postcards, sent by visitors. Here below anothe card from Bulduri to Berlin with a nice view of the beach. 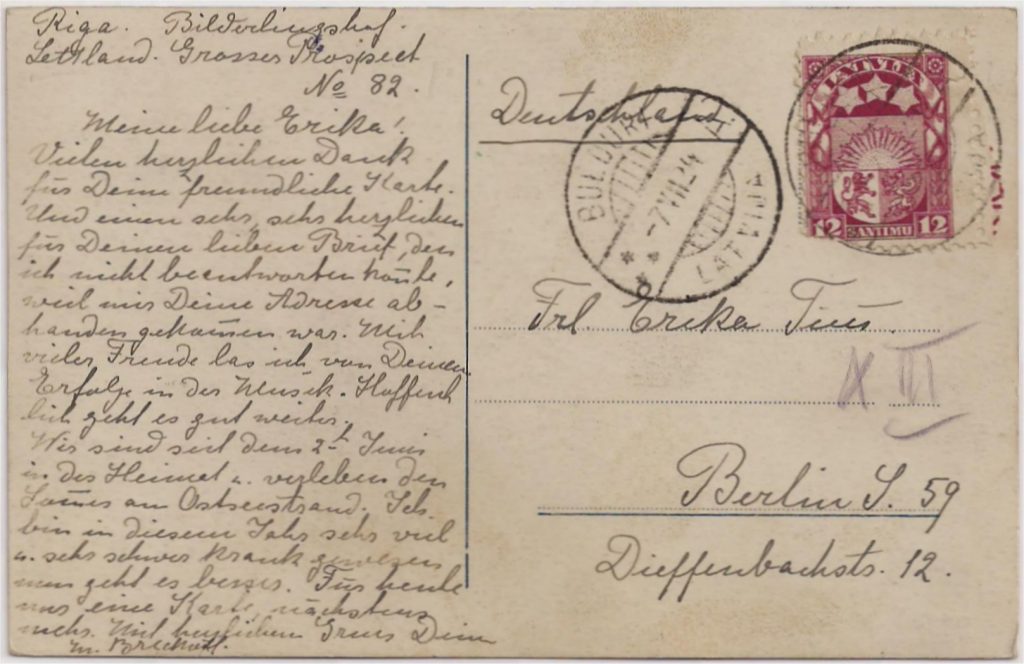 In 1920, from August 6 to September 6, the first ‘Baltic Conference’ is held at Bulduri. It was organized by the Latvians and they invited not only Finland, Estonia, Lithuania and Poland but also the Scandinavian countries. The Scandinavian kingdoms did not answer. The Ukrainians and White Ruthenians arrived uninvited. The Ukrainian representatives were admitted on August 20, but not the White Ruthenians: Soviet Russia might be offended. In this time Soviet troops -two armies- tried to conquer Warsaw.
At this time the Lithuanians were again in their old capital Vilnius, but the Poles did not accept this. Estonia and Lithuania had signed their peace treaties with Soviet Russia but Latvia signed hers during the conference, on August 11.
Finland still had difficulties with the Russians over Karelia. Proposals for cooperation were postal, telegraph, telephone and railroad conventions, economic cooperation, a convention on civil rights and more.
On August 31, 1920, a secret political treaty was agreed. See:

Here a postcard from Majori. 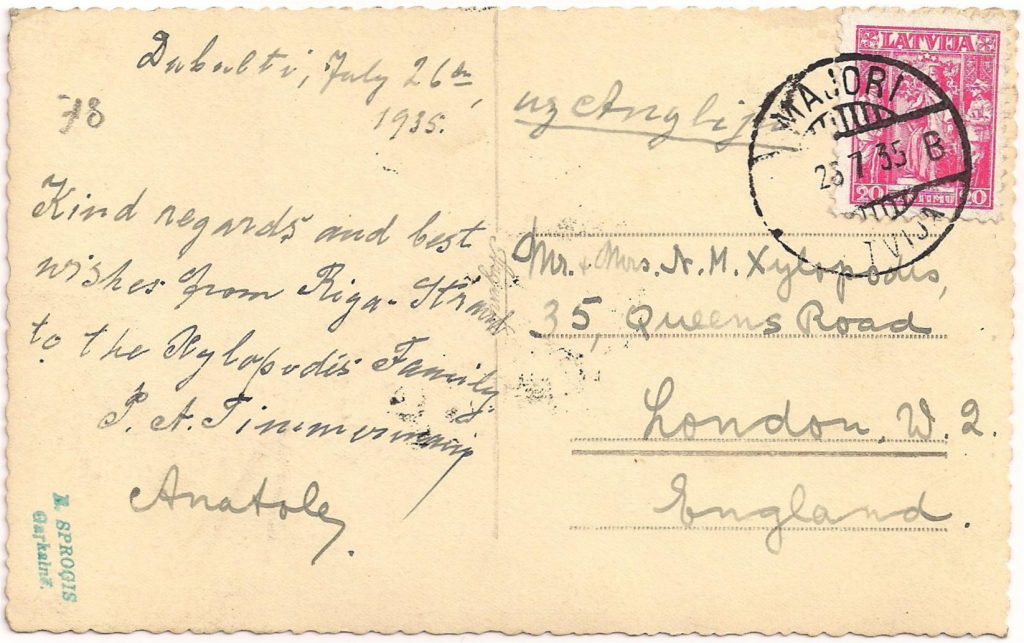 Another picture card from Majori 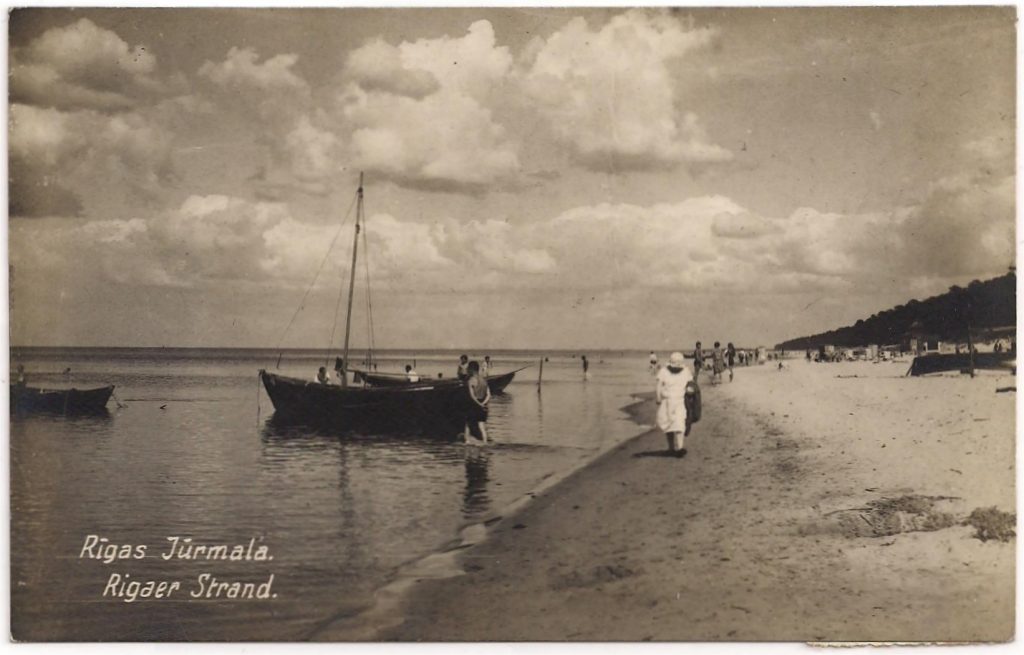 The address-side of this card with the same postmark as above:

Melluži, the former Karlsbad, could be reached by two railwaystations, Melluži I and Melluži II, respectively 27,5 and 29 km from Riga. The post office is opened August 25, 1919. 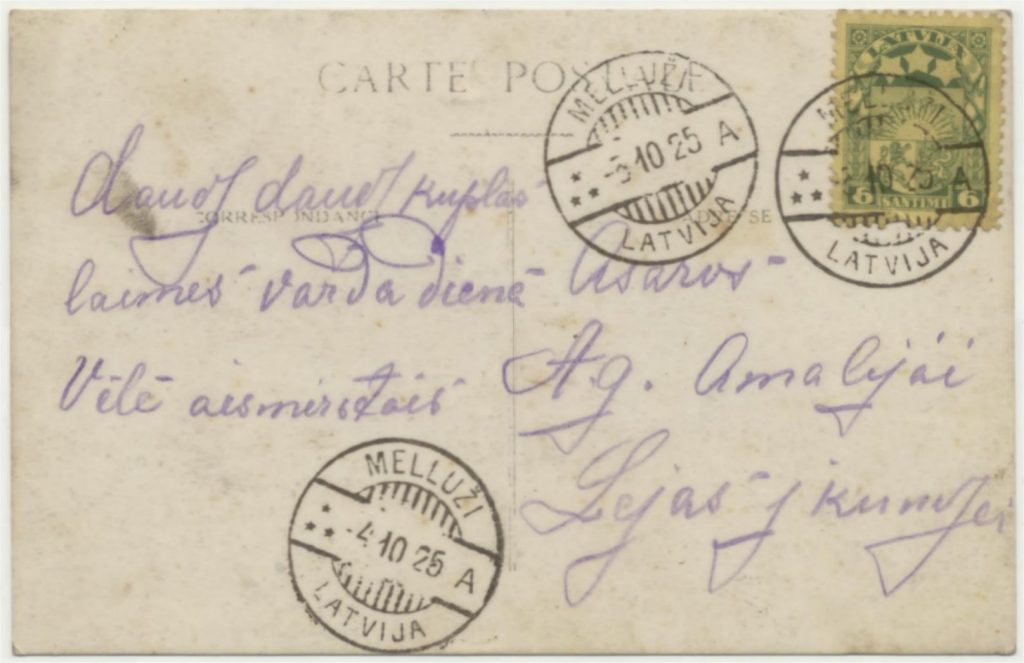 Asari, the former of АССЕРНЪ (ASSERN), is located -as you can see on the map above- in the west of Rigas Jūmala.

Asari is mentioned in the travel guidefrom about 1928 – Der Rigasche Strand – Baltische Riviera (p. 27): the place had two railway stations, Asari I (30 km from of Riga) and Asari II (32,5 km from Riga). The place couls also be reached by boat: in ‘Valtera muiža’ was a steamer stop on the shore of the river Lielupe, south of Asari.

In 1938 when the Asari II railway station was renamed and the name of Vaivari appeared. The present railway station of Asari is an old building: one of the most beautiful of the baltic.

Vaivari and Asari stations on a modern map.