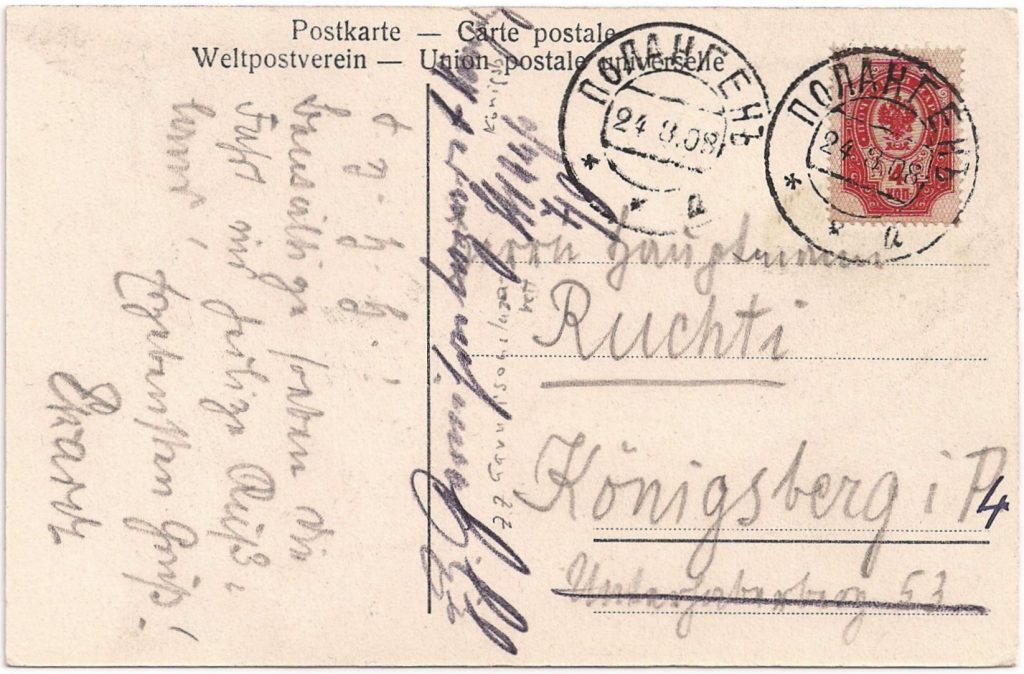 The postmark ПОЛАНГЕНЪ [POLANGEN] is dated 24.8.09. We are talking about the Lithuanian city Palanga, on the coast of the Baltic Sea.

Mail items from Palanga can also be part of the collection of the Latvian collector. After the First World War the area around Palanga was part of the independent Latvia. In Imperial Russia the city was located in the government of Courland, which with a art of the government Livonia formed the new state Latvia.

The Russian name is derived from the German name Palanga. The place also has a Polish name: Połąga.

On the image side of the card is placed the indication ‘Le chateau du comte Tysckewicz’.

The house Tyszkiewicz was a family of Polish-Lithuanian magnates. In 1824 count Michał Tyszkiewicz bought Palanga. His grandson Jósef Tyszkiewicz built a pier and ship passengers and stones were transported to Liepajā.

His son, Feliks Tyszkiewicz, built the palace Tiškevičiai. The neo-Renaissance palace is build between 1893 and 1897 by the famous German architect Franz Schwechten. Between 1897 and 1907, a park was constructed around the palace, designed by French landscape architect Édouard André.

Antonia, the wife of Feliks Tyszkiewicz, got in 1907 a healthy boy, Stanislaw, after a difficult pregnancy. Then out of gratitude Feliks placed a statue of Jesus in front of the palace. His son Stanislaw with his wife during is in the Second World War expelled from Palanga.

The statue shown on the card has been removed by the Communists in 1948.
In 1993, a reconstruction of the statue was created from old photographs and the statue was put down on the old place. Since 1963, the Palanga Amber Museum is housed in the palace. The park became a botanical garden.

After World War I Palanga is named Palanga and belongs to Latvia. So there is a Latvian post office in the period 13.03.1919 and 30.03.1921. One Latvian postmark was in use, Type 4: converted Ob.Ost. postmark with the city name at the top and country name at the bottom.

After the Latvian period the 7 different Lithuanian postmarks are used. 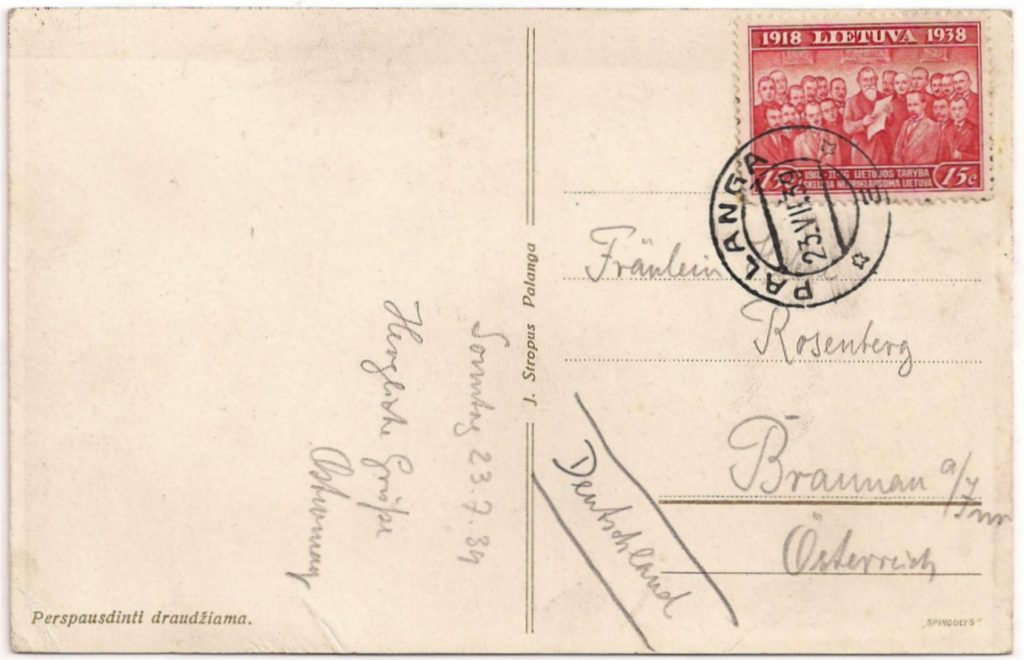 This postmark, type 8 with serial letter E, is used -according the postmark-handbook- between 9.VIII.38 – 5.IX.44.

The card here below has another postmark: 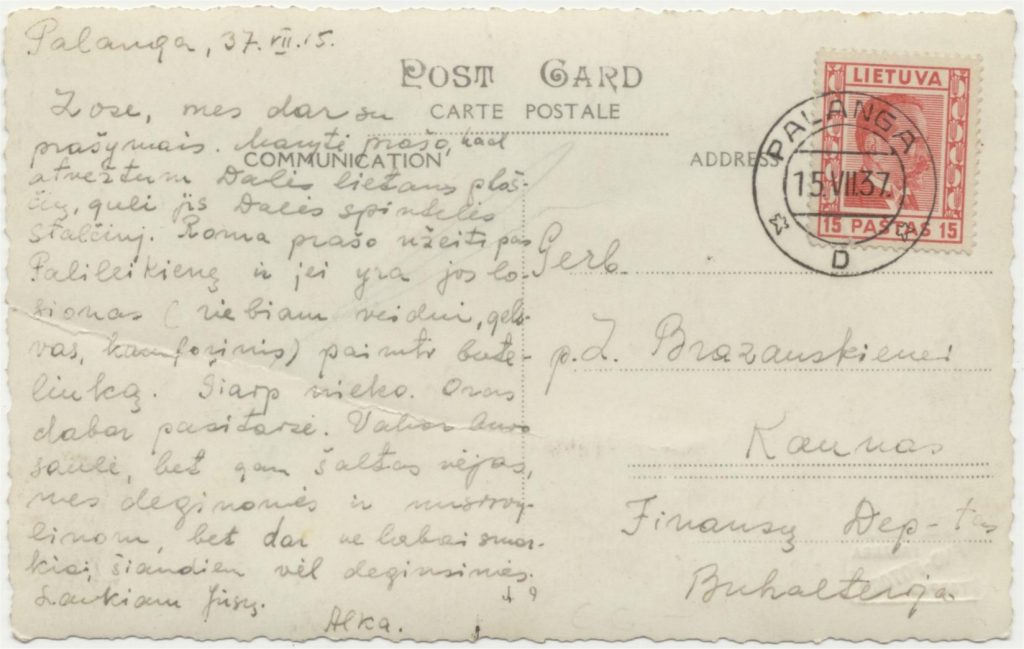 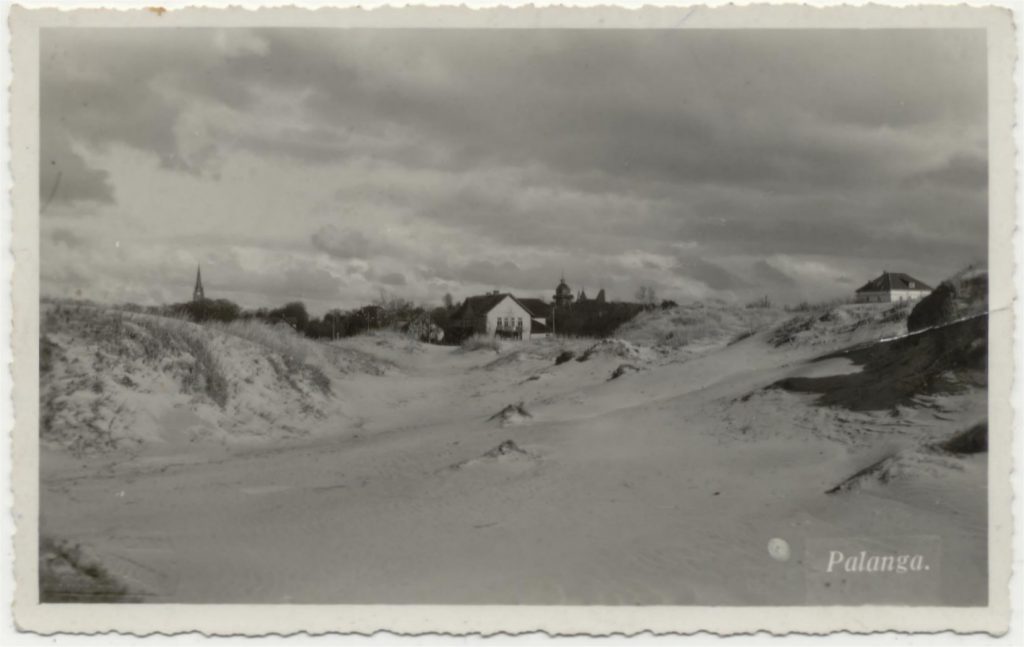 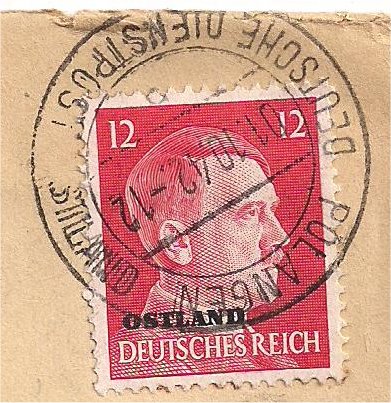 On November 4, 1941 the Ostland-overprints were issued: Hitler-stamps with black overprint “Ostland”. 18 different  overprint-stamps (Mi. 1-18) are printed at the State Printing House in Berlin.
In 1943, two additional values (Mi.19-20) are issued. Further still automatic/machine rolls are issued with 4 and 6 Pfennig together in 1942.

After World War II the Soviet-postmarks are used. After the renewed independence cut Soviet postmarks  are used and new Lithuanian postmarks.

During the Soviet period, postal stationery are issued with a picture from Palanga.
The envelope below is issued on February 17, 1977. 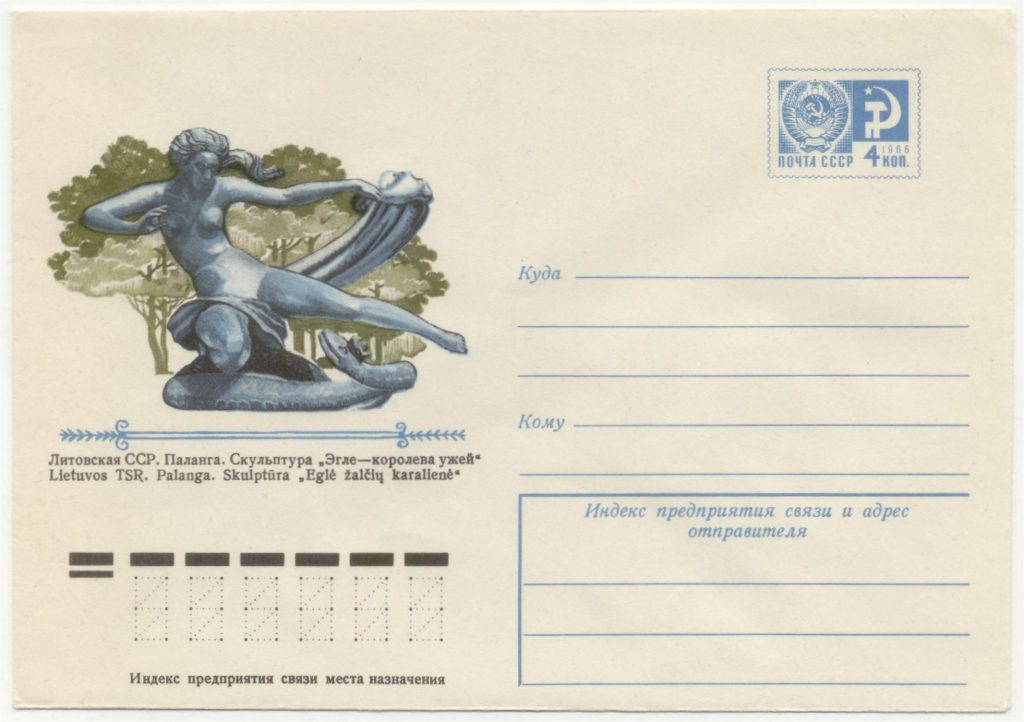 In the Soviet Union, many illustrated postcards or picture postcards as postal stationary are issued. A catalog from 1992 describes approximately 20,000 of these types of postal stationery.
The cards are also sold as a package: 10 pieces. Palanga was a tourist destination and therefore eligible for the issue of a package of postcards-postal stationery. 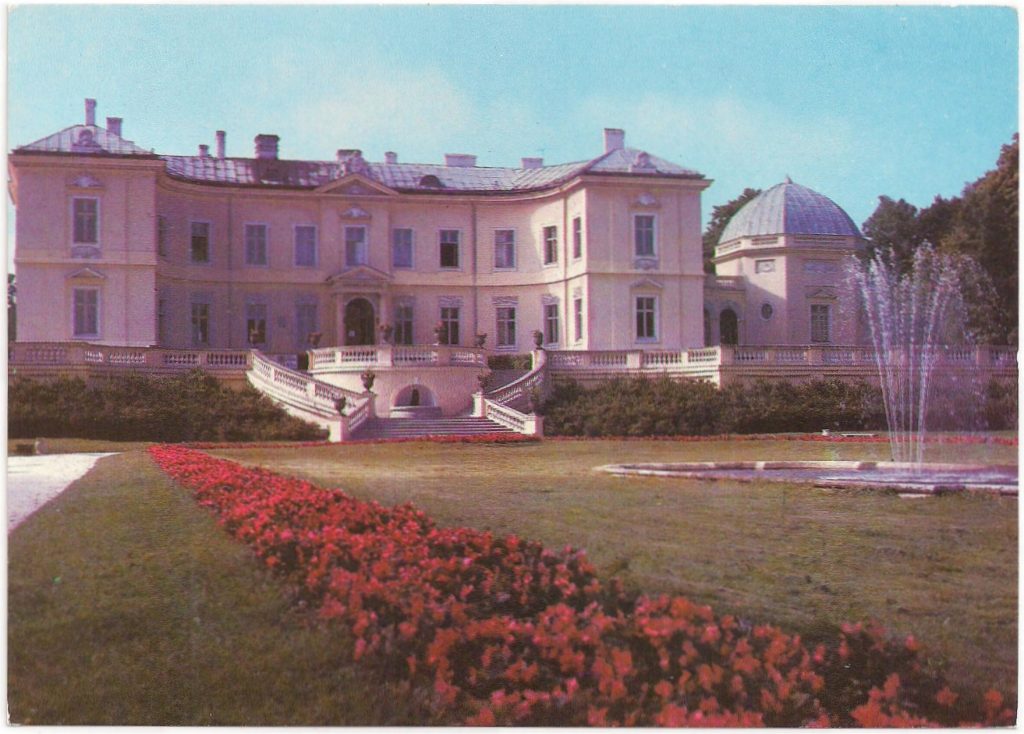 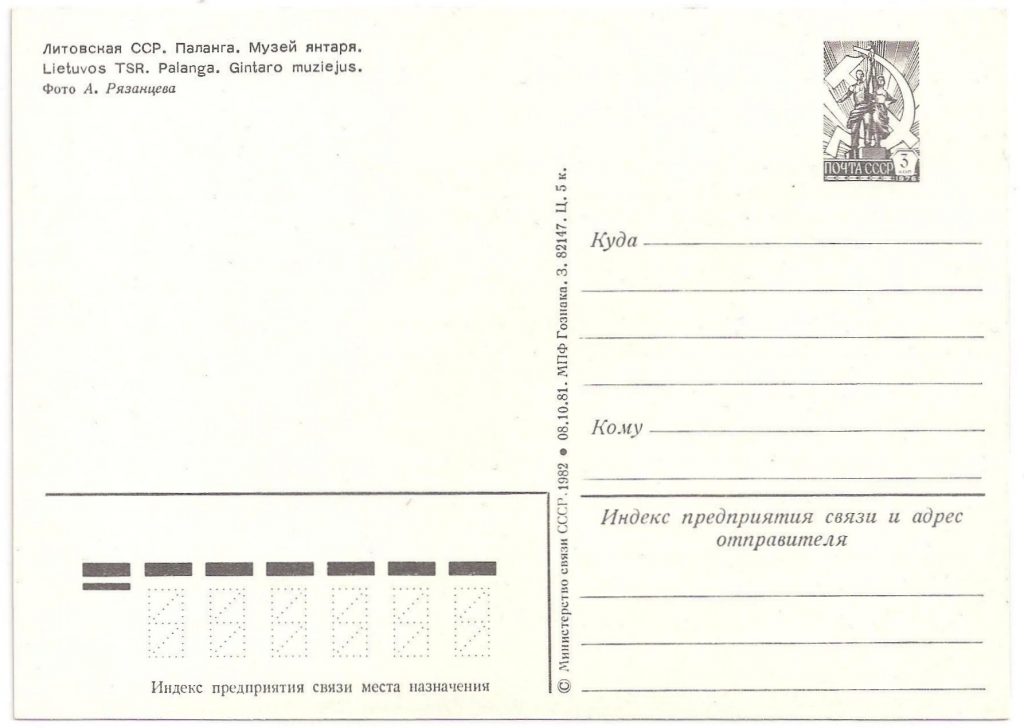 Another card – postal stationary- with the museum:

The address side of this card:

Pictures of Palanga can also be seen on envelopes -without imprinted stamp, so no real postal stationery- issued by the Lithuanian Ministry of Communications in the years 1950-1990. 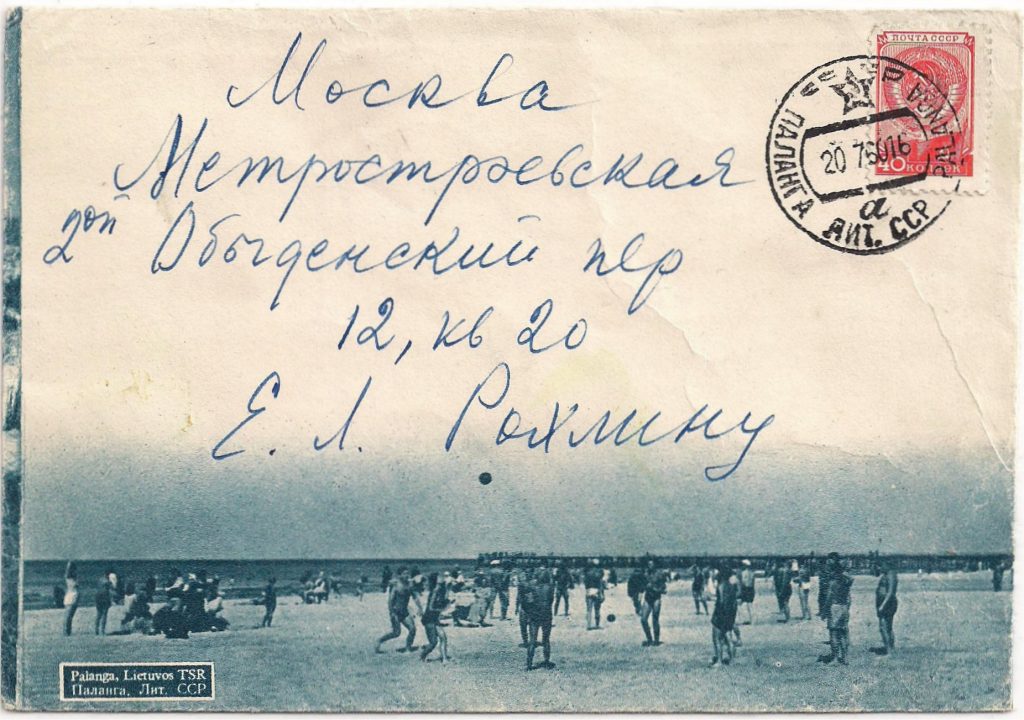 This envelope, published by Lithuanian Ministry of Communications, shows not only the beach of Palanga, but also has a bilingual Soviet stamp of Palanga. Cyrillic in the stamp:
ПАЛАНГА ЛИТ. ССР [PALANGA LIT. SSR].
The back of this cover is also filled with images of Palanga: 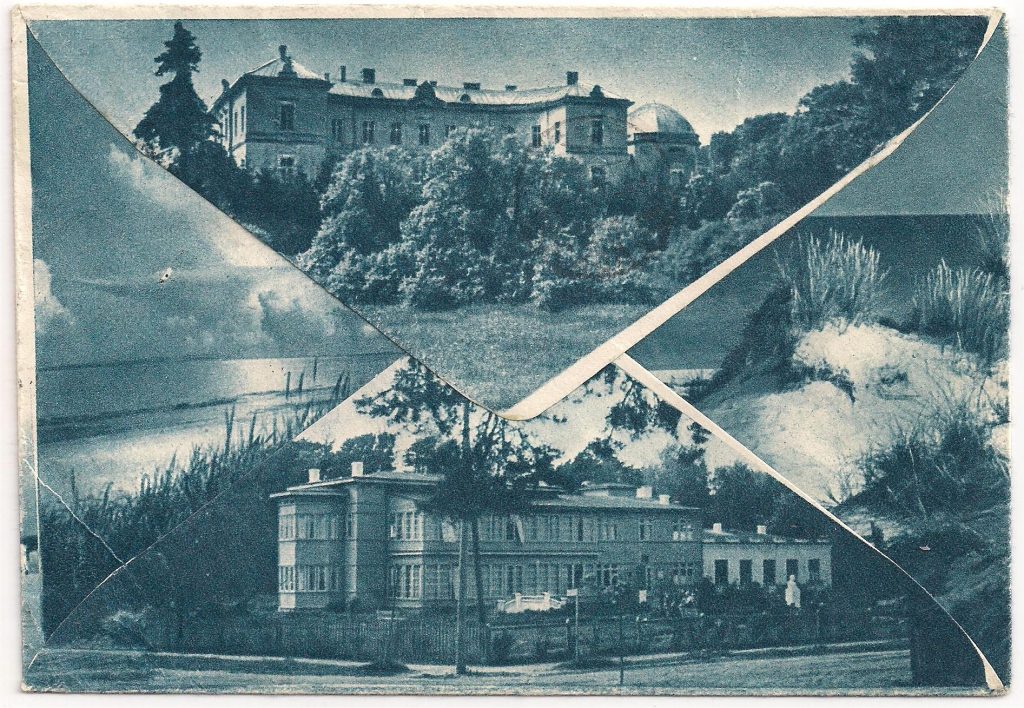 Kostas Aleksnynas has compiled a catalog of those envelopes:
Meniniû Vokû Katalogas 1950-1990 / sudare Kastas Aleksynas.
This “Catalogue of artistic envelopes 1950-1990” is published in Vilnius in 1991.
In the -Lithuanian- introduction we read that it was intended to express artistic images on the envelopes, which Lithuania could be proud. They were considered works of art and eagerly collected.

The following envelope has also as subject Palanga, but was sent from Nemenčinė, near Vilnius. 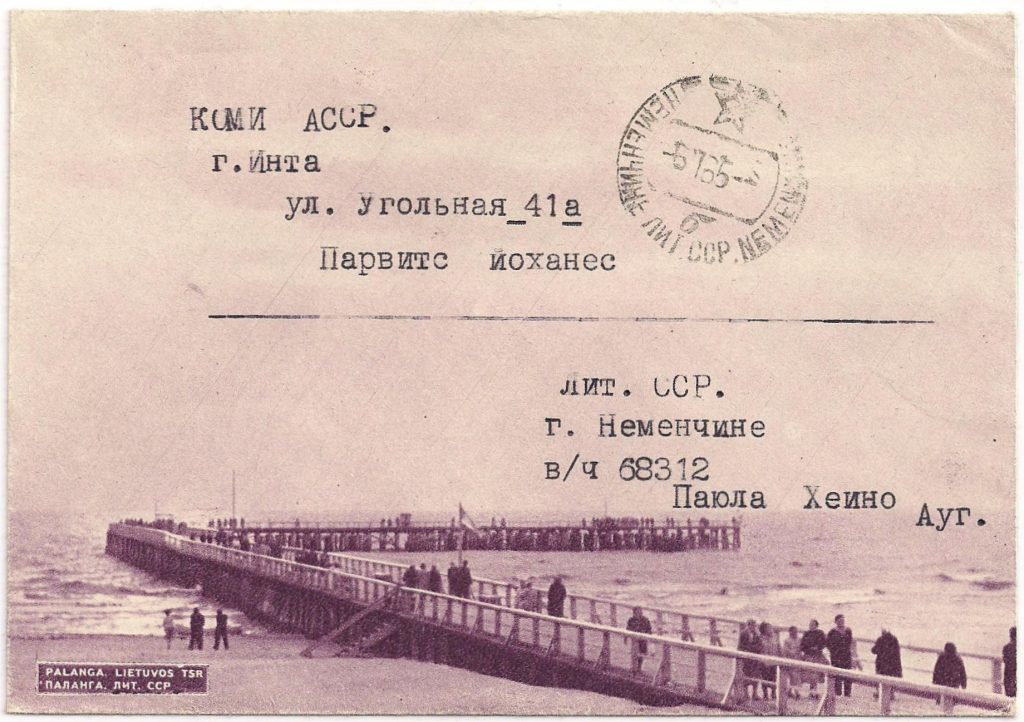 The cover is sent to КОМИ АССР [KOMI ASSR]: an area north west of the Ural Mountains. On December 5, 1936 this area was named “Komi Autonomous Socialist Sovjet Republic,” the Komi ASSR.
Under Stalin here prisoners were sent to prison(labour) camps. The principal “corrective labor camps” were under the administration of the government office ГУЛаг [GULag]. The name GULag is an acronym for ‘Glavnoye upravleniye ispravityelno-trudovykh lagerey i koloniy’, “Main Administration of Corrective Labour Camps and Colonies” of the NKVD. Gulag was officially established on April 25, 1930 and released January 13, 1960.

In the address is also mentioned the city: Г. ИНТА [G. INTA], Г. is the abbreviation for ГОРОД [Gorad] city. Inta is located in the northeast of the Komi Republic and was founded in 1942. It was a “Corrective Labor Camp ‘: even the city of Inta is built with forced labor, like many cities, railways and roads in the Komi Republic. 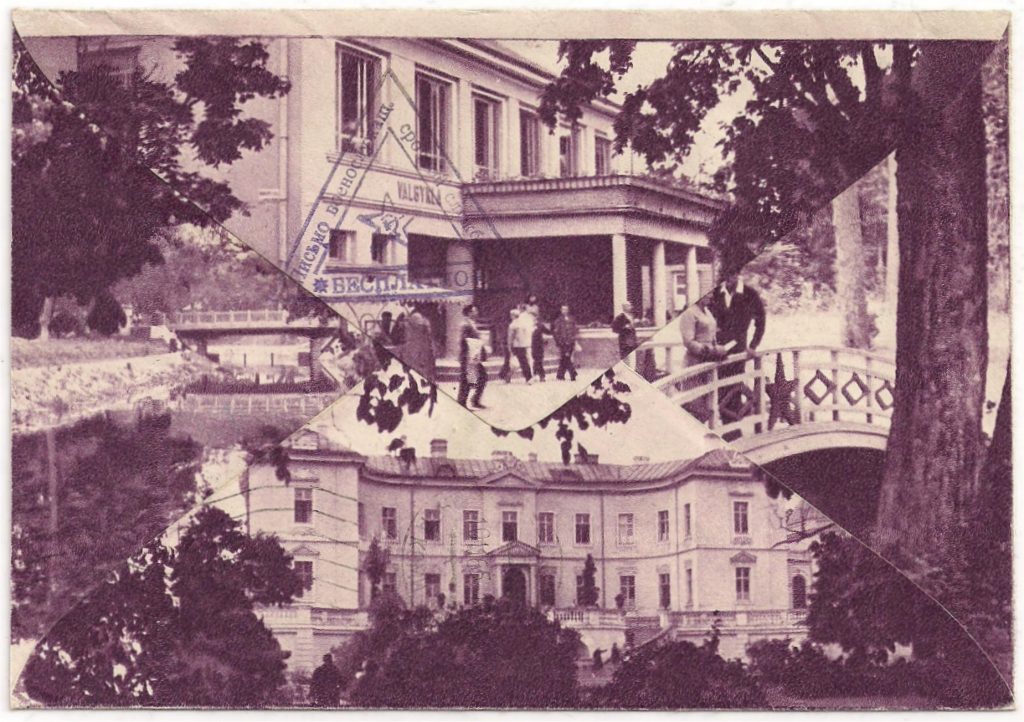 Military, triangular stamp on the back. 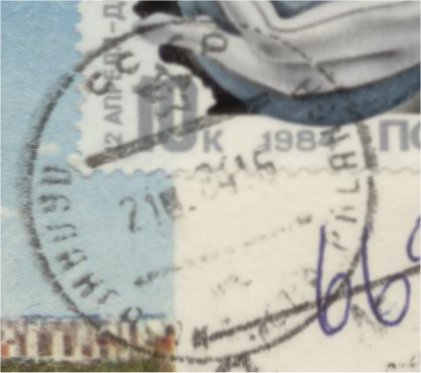 The bilingual soviet-postmark of Palanga. This type has two vertical lines with between the date.

The postmark on the cover above is an older type: bilingual doublering-postmark, the date in a box with round sides left and right. 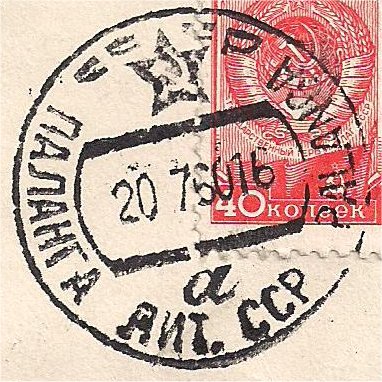 In 2009 independent Lithuania has issued a stamp with the Palace Museum.

Lit. 3 An overview of Latvian postmarks on the site of Juris Mors www.latphil.se