About 1905 the Krag Maskin Fabrik in Oslo constructed a cancellation-machine. `With this machine it was possible to cancel 600 items in 1 minute.The letters and cards moved along the cancellation-cylinder.
The circumference of this rotating printing cylinder was 157 mm, with an outside-ring divided in four parts: two cancellations and two frames (‘flags’) (lines, etc.). The distance between two similar points of the postmark is thus always 157/2 = about 78 mm.
An rotating inkt-cylinder provided a constant inkting
After the introduction in Russia (1906) the machine were used in the great cities (1907-1908). According Kiryushkin & Robinson the machines were bought and paid by the local post authorities. So we see that the machines are used in great cities, but not in all, and also in more little towns. The first machines stood in Russia in St. Petersburg and Helsinki. The first known postmark is from Helsinki (Helsingfors), 20-7-1906. In Riga were placed more machines. V. Marcilgar (see literature below) mentions 18 June 1908 as date of the first KRAGmachine cancellation of Riga. All cancellations were double-ring postmarks. In the Baltic there were also placed machines in Tallinn (Revel) and Tartu (Dorpat or Jurew).

This is the earliest type machine cancellation of Riga, used from 18-VI-1908 to 23 IX 1912. It is the type of most frequent occurence. This type has 8 cancellation-lines and a star with six rays at the bottom and is used as sender-postmark. The diameter of the cancellation is 28,5 mm and without points in the date.
The fouth line is -when carried further- in the centre-point of the date-cancel, the 8th line is -carried further- tangent of the date-cancel.

The datestamps on the card above above is still in good shape:  the machine was on August 1, 1908 a short period od time in use. In December, the bottom line of the second date stamp was badly damaged:

On the card above the datestamp on the right side is very damaged. Marcilger shows a card with the postmark 10 XI 1908 on which the datastamp on the right already has a break in the line below of the datebridge. Despite repairs, this problem will continue over the next two years.

In the book of Marcilger there is a desscription of the development of this postmark. The oldest postmarks are clear and the star has thin sharp rays. By bad maintenance the postmarks became unclear. In this one of December 1910 the line under in the date-cancel right is more damaged, the rays of the star are not so thin and sharp.

The letters and cards were transported -upside down – along a metal trench, pushed by an milled (serrated) cylinder. Sometimes this cylinder get also some inkt and that caused the milled sign on the upper edge as you see above.

There are two types of these tracks of the milled cylinder. O the card above and another (little italic lines). >>>>>>>> 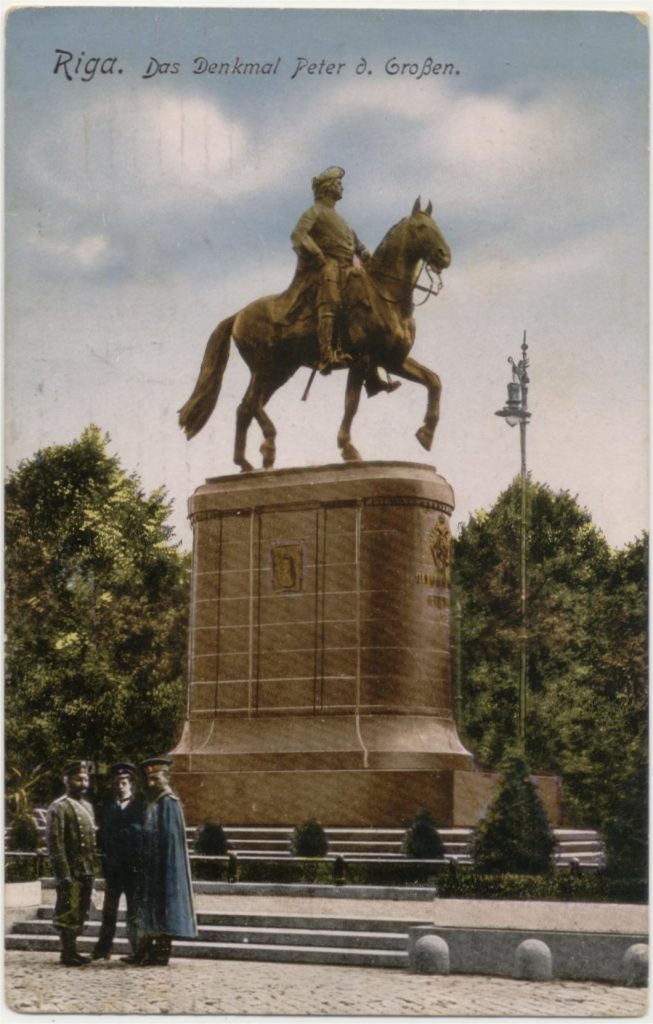 The nice other side of the card with the statue of Peter the Great in Riga. The statue is made by the German artist Gustav Schmidt-Kassel and is placed in Riga in 1910 on the Aleksandra boulevard. In 1915 it is demontated for transporting it to St. Petersburg. A German submarine destroyed the ship and it gone away in the sea. In 1934 it is found by Estonian divers and the statue came back to Riga. The name of the street was then changed to Brivības iela (Freedom street), and on the old place was since 1935 placed the new Monument of Freedom.
The statue of Peter the Great is repaired in 2003, paid by the merchant Yegeny Gomberg. He erected it on a new place -without permission- in Kronvald Park, on the area of the Riga Harbour Authority. For ultra-nationalists it was a pro-Moscow provocation. When Gomberg should get a penalty, someone else intended to pay for him. So an old statue gives political meaning.

The written date is 21/6: the sender had the western -Gregorian-date in mind. Below: the other side of the card with the park near the theatre. 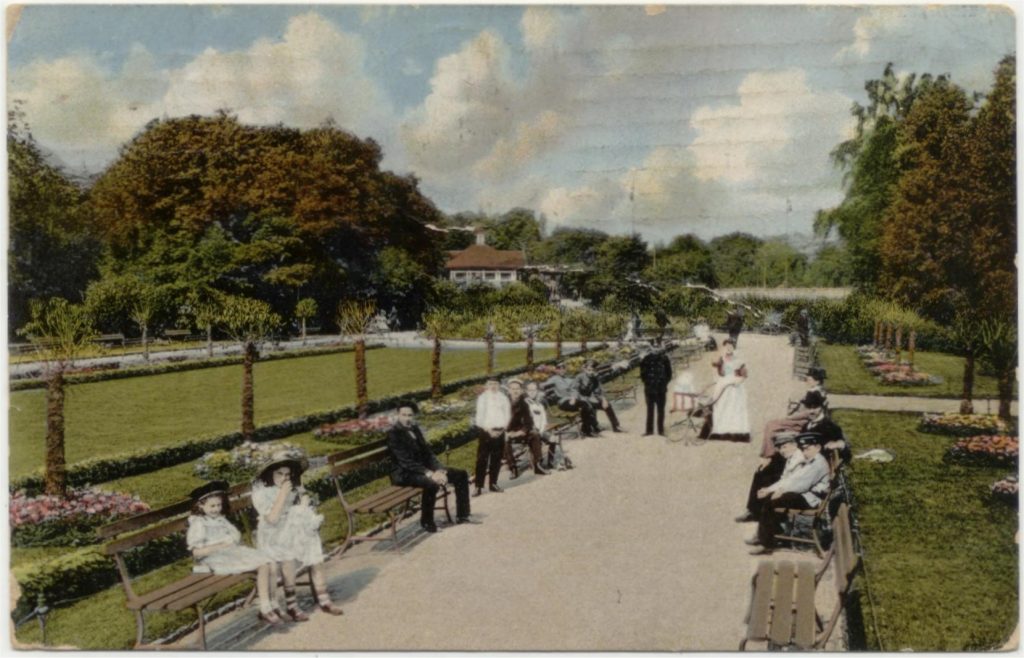 On the card here below is something going wrong:

The picture-side of the card above gives a view on Riga.

Here below a card with a different 1 in the left datestamp. In 1911 were also more figures 1 necessary.

In 1912 the ornament (star) is replaced by an index-number 1, 2, 3, 4. These numbers have -probably- nothing to do with numbers of town-postoffices. The ornament or empty place and numbers changed in a short time in the same postmark, so one can suppose that the machines were only used on the head-postoffice.
For Marcilger there are seven main-types of the machine-cancels.
Part of this cover inside:

This second type of the Krag machine cancellations in Riga, has points in the date after day, month and year.
On 8.V.1912 you can see first time the indexnumber ‘2’ , below in the postmark, in this type cancellation.

For distinguish you have the dates above, but also very easy:

From 1914 to 1917: very little post to and from Riga, so it is difficult to distinguish types of machine-cancels. In 1914 there are also used ‘mute’machine cancels, very rare, see below.
From the beginning of 1915 to the occupation by the Germans: the cancels become more damaged and unclear.

On this card the ornament (star) is replaced by index-number 1. These numbers (1,2,3,4), since 1912, have -probably- nothing to do with numbers of town-postoffices.

The picture side of this card:

Mr. Marcilger mentions also some distinguishing marks of this type:

A machine postmark of РИГА (RIGA), with 8 lines:

There are two types of these tracks of the milled cylinder. The type here left and the type on the card above (little italic lines).

Here below a card with type 6:

The oldest ‘frames’ were 8 lines. But the straight rising ridges caused a permanent nick in the ink-roll and so parts of the cancellations get no ink. Therefore Riga changed later to 4 straight lines.
When the machine slipped, the cancellation is deformed and the distance is shorter than 78 mm, as you can see here below. 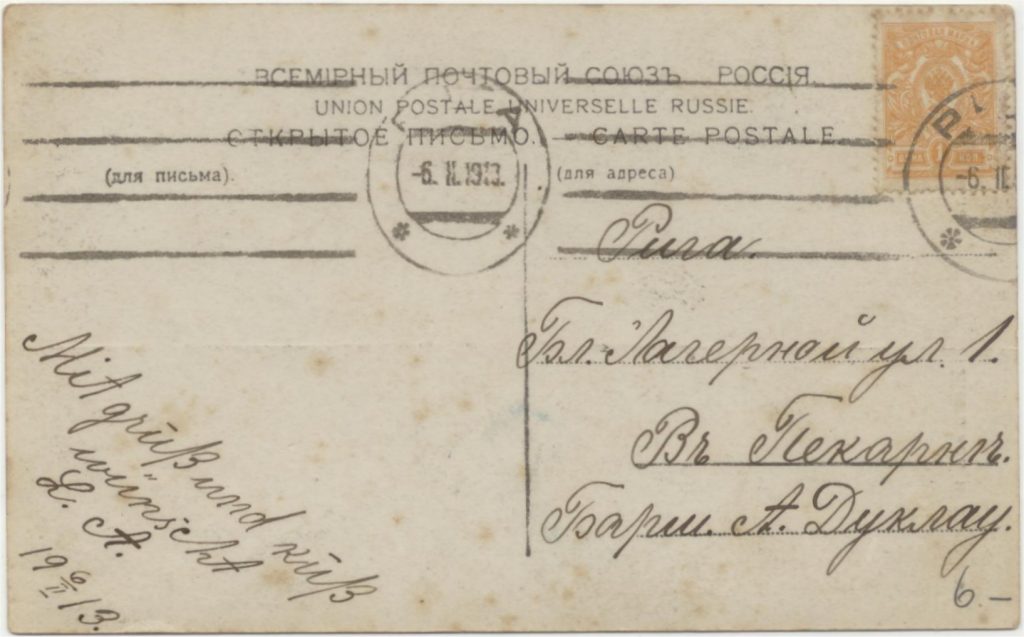 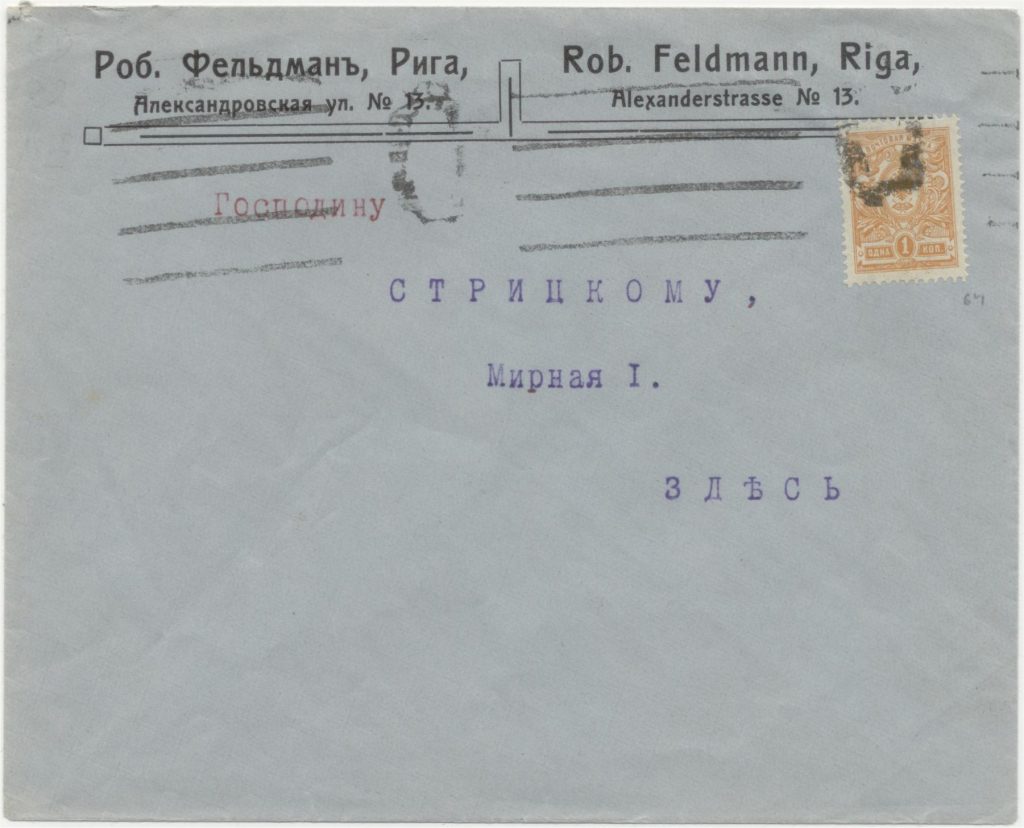 On this cover a machine postmark of РИГА (RIGA), but a ‘dumb’ or ‘mute’ postmark.
This kind of postmarks were used in World War I with the intention to make identification of the place impossible. So identification is often a complex problem, but here the postmark is not very effective: the company and place is printed on the cover!
Left above there is also a red stamp, which means: ‘To mister’

Machinecancels in the Latvian republic 1918-1940

KRAG-machinecancels from other places in Imperial Russia