The first postage stamp, mi. 1494, with the Union-building in Riga, Bruninieku straat, 29-31.
Architect Ernest Stalberg, project 1927, but partly constructed. Built in 1930-1931 by the German architects Alfred Karr and Kurt Betge.

Mi. 1495 with an image of the building of the Council of Ministers. Now it is used as the Palace of Justice.

Built between 1936 and 1938 as a new home for the Senate and the Ministry of Justice.

During the Soviet period, high-ranking Soviet soldiers were buried around the grave of Rainis.

Mi. 1497 with an image of the Latvian national opera and ballet theater in Riga, built in 1863 and restored to its full glory in the 1990s.

Mi. 1498 with a picture of the University of Riga

Mi. 1499 with a picture of the Academy of Sciences in Riga.

Here the old building. In 1951-1961 a new building was build in the ‘Stalinist architecture’ style.

Latvian fair pavilion in Moscow: Vystavka Dostizheniy Narodnogo Khozyaystva (VDNKh) Russian: Выставка достижений народного хозяйства, ВДНХ. In 1935 established as Agricultural Exhibition of the Whole Union. The exhibition buildings were built in the period 1935-1939. Between 1948 and 1959 everything was renovated and in 1954 the first exhibition was held since the war. Still as an agricultural exhibition. In 1959 the park was renamed: Exhibition of achievements of the national economy ( Russian: Выставка Достижений Народного Хозяйства , Vystavka Dostizheniy Narodnovo Khozyaystva) or ВДНХ / VDNKh . In 1992 VDNKh was renemed in the new acronym VVC and in 2014 the old name returned: ВДНХ / VDNKh.

A view of Riga from the river in the series Capitals of the Union Republics (I).

At the top of the indication: 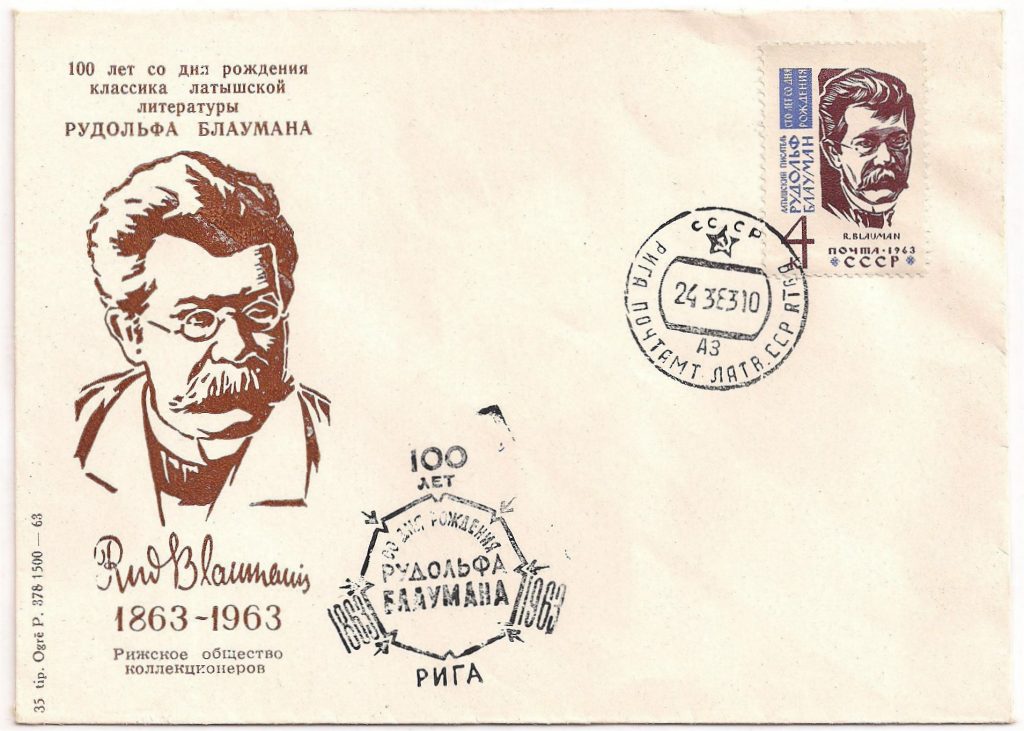 Letter with Michel 2734 and commemorative stamp Riga. Postage stamp with a picture of the Latvian writer Rūdolfs Kārlis Leonīds Blaumanis (1862–1908). He is considered one of the greatest Latvian writers. See Wikipedia.

Postage stamp: flag and coat of arms of the Latvian Soviet Republic in a aureole.

Postage stamp with an image of the Latvian poet and politician Rainis. Rainis was the pseudonym of Jānis Pliekšāns (11 September 1865 – 12 September 1929).

Postage stamp with a picture of “Juras Perle”, Sea Pearl, a famous restaurant on the beach of Bulduri. It was built in 1965, the architect was Josifs Goldenbergs. On the first floor was also a night-bar.
Unfortunately, the restaurant burned down in 1991. In 2001 the remnants were removed.
In the series Health resorts on the Baltic sea coast.

Postage stamp issued by 50 years of Soviet power in Latvia

50 years of radio and telephone equipment factory in Riga

The stamp and the postal stationary were issued at the 30th commemoration of the defense Liepāja in the Second World War (June 1941). The monument, a bronze statue of two freedom fighters and a woman, is dedicated to those who fought in June 1941 against the invading Nazi army.
The architect of the monument was Janis Līcis. The designer was Vasilijs Liekne and the sculptor was Egons Zvirbulis.

100 years of Latvian Song Festival.
From Wikipedia:
The tradition of song festivals originated in the first half of the 19th century in many European countries and later was also organized by the Baltic Germans. The first steps taken in Latvian environment was during the song days in Dikļi in 1864, which led to the resounding of a full-scale Song Festival in Riga during the summer of 1873. 1003 singers and 30 orchestra players participated in the first festival. Only once festival was held outside Riga- in Jelgava in 1895.

In the series of buildings in the Baltic states: Riga.

In the series History of Russian aircraft construction (I).
Plane No. 2 by Jānis Steglavs (1870-1944), Latvian businessman from Jelgava and aviation pioneer. He moved his company (metal) to St. Petersburg and became rich there.
His first plane ‘Dubbeldekker nr. 1’ took part in a design competition of the Russian Ministry of War in May 1911. He learned to fly in this aircraft.

Biplane No. 2 (on the seal shown here) was flown during the St. Petersburg competition in 1912 and was the fastest of the aircraft present. The plane has a top speed of 130 km / h.

100th birthday of Martin Ivanovich Lācis (Russian: Мартын Иванович Лацис  Latvian: Mārtiņš Lācis, born as Jānis Sudrabs) (1888 – 1938) He was a politician of Latvian origin (from Putina estate, Wenden district). In 1938 he was executed, but rehabilitated in 1956. More information: Wkipedia

Series Epen of the peoples of the Soviet Union (III).

The Latvian epic Lacplésis, the Bears killer,  is written by Andrejs Pumpurs (zie Mi. 2565).  The poem appeared for the first time in 1888.
The Dutch summary by  Andrejs Pumpurs: as pdf downloaden
The English summary: as e-book on www.gutenberg.org/ebooks/17445

In the series of capitals of the Soviet republics: Riga

Mi. 6113, issued 1990, August 1
Series of historic buildings: Riga.
On the stamp you can see the St. Peter’s Church: (Latvian: Svētā Pētera Evaņģēliski luteriskā baznīca) a Lutheran church in Riga. The church is dedicated to Peter and is used by the Latvian Evangelical Lutheran church.

See Wikipedia: Jāņi is an annual Latvian festival celebrating the summer solstice. Although the solstice usually falls on 21 or 22 June, the public holidays—Līgo Day and Jāņi Day—are on 23 and 24 June. The day before Jāņi is known as Līgo Day (formerly known as Zāļu Day).