In the Soviet period, many postcards as postal stationary are issued. Also many cards have an image from the Baltic. These postcards are part of our collection area.

An overview of the cards with Latvian motif can be found in:
Bild- und Schmuckpostkarten mit Bezug zu Lettland als UdSSR-Ganzsachen / von Harry v. Hofmann
Hamburg : Harry v. Hofmann Verlag, 2014.
Based on this book by von Hofmann and my own collection, I have made a list:  downloaden as pdf. 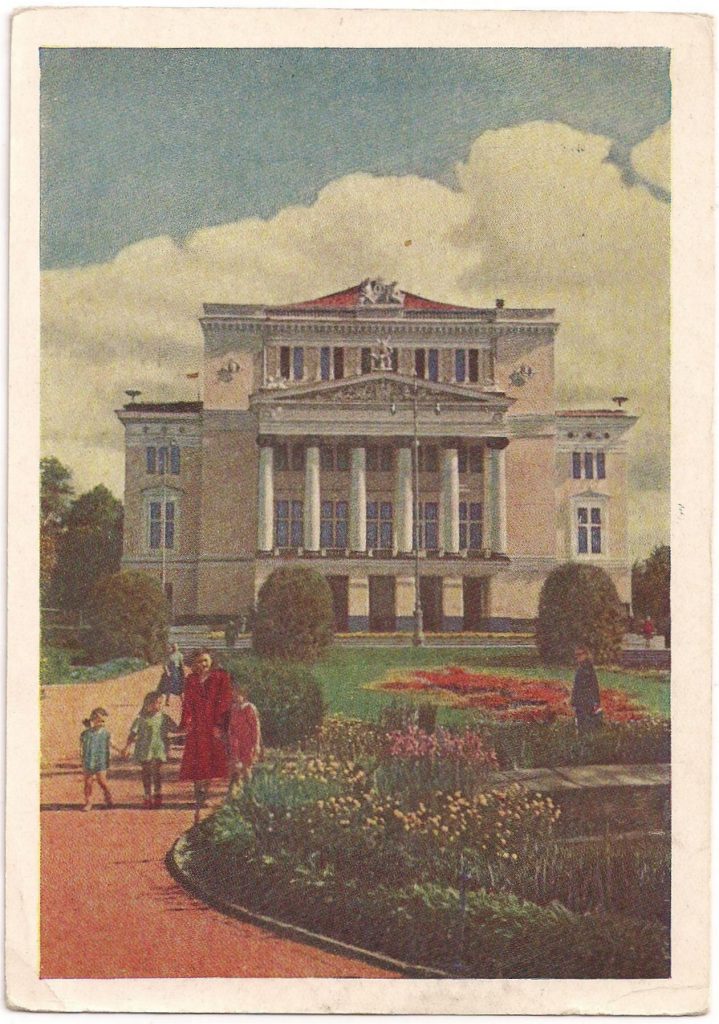 This card is an old card, the oldest, with a Latvian motif.
The card is issued 17/VI 1954, and with the money reform the card get a stamp. From 1-1-1961: 10 old kopeken are 1 new kopeke. The stock picture cards with imprinted stamp of the miner get an overprint ‘From 1 januari 1961 [is] price of the card with stamp 4 Kop.’ (P249-P250 with overprint in box, and P256-P259 without box). The postcards with the Spasskitower as imprinted stamp -as these card- are also overprinted. Below the address side with imprinted stamp: 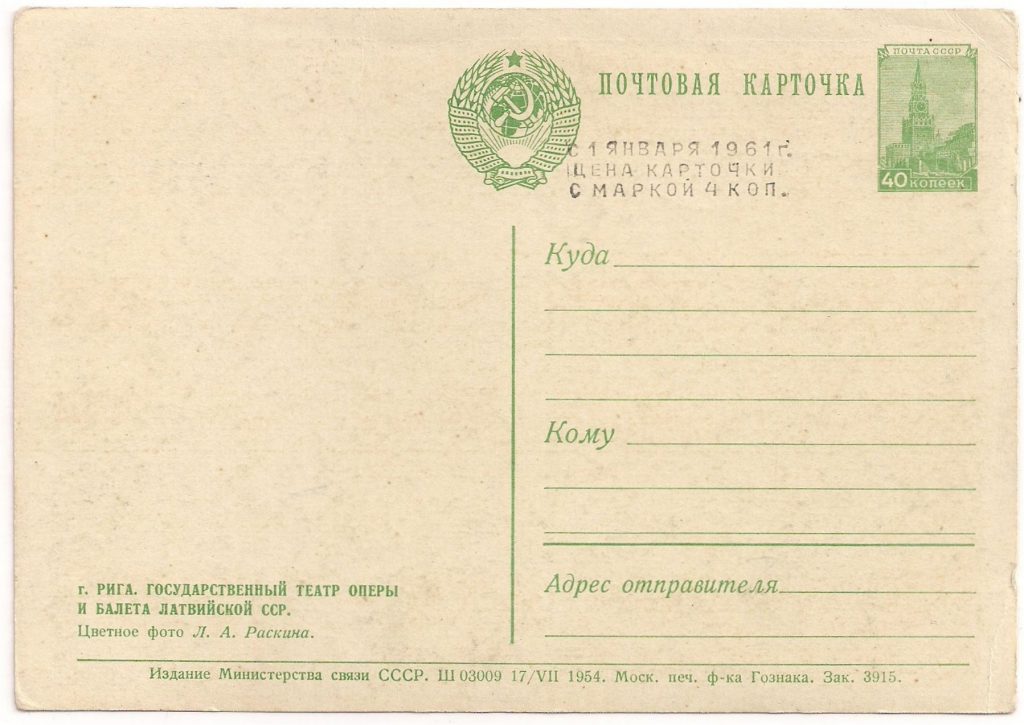 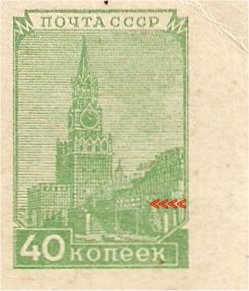 The description of the picture – the Theatre in Riga- is only in Russian. Later cards have also a description in Latvian.

At the bottom of the card: the printing data in one line:

The coat of arms has a total of 16 ribbons and text in one line as points: so type IVC (in the Michel Ganzsachen-Katalog). The coat of arms: has left and right ribbobs and 1 ribbon at the bottom, with a text or a text only by dots indicated text.
Type IV: 16 ribbons (1946), the number of union republics
IVA with two line text
IVB also two-line, but points
IVC single line: points, on this card above
TYPE V: 15 ribbons (1956), the Karelo-Finnish SSR in 1956 incorporated into the Russian SFSR VA with two line text
VB also two-line, but points
VC single line: points
The text: “Proletarians of all countries unite”.

For cataloguing we need also the coat of arms types, mentioned above:

MGK (Michel Ganzsachen-Katalog) mention under P219A, subdivision IIa cards with picture. Here also the interesting card ‘Lenin-Stalin-Mausoleum (5/VIII 1954)’. The picture of this card has above the mausoleum clearly indicated Lenin and Stalin.
More about this: another site

On the address side of this card is indicated -bilingual-: ‘LATVIJAS PSR. RĪGAS JŪRMALA’ . Also the художник (=artist) is mentioned here.

On the bottom line we see the printing data.
The card is issued in 1961 and printed in the МПФ ГОЗНАКА, the abbreviation for МОСКОВСКОЙ [MOSKOVSKOI] ПЕЧАТЉОЙ [PECHATNOI] ФАБРИКЕ [FABRIKE] ГОЗНАКА [GOSZNAKA], Moscow Printing Factory Goznak.
Number 16084 is the number of the ЗАКАЗ [ZAKAZ], order.
A stamp of the 10th series permanent postage stamps, with the year 1961, is used as a stamp: a starting rocket.
In MGK 2004/05 four types of this stamp are distinguished:
I Letterpress (lines on background and moon with greater distance from each other)
II Offset printing (background and moon with finer lines)
III Offset printing (finer lines on the background, moon without lines)
IV Grid gravure (background and moon: grid)

This postal stationary with МПФ ГОЗНАКА and imprinted stamp Type II is in the Michel P 285, subnumber III (only the year, not a number starting with A in the printing data).
About the picture postcards with imprinted stamp:Postwaardestukken uit de Sovjetperiode : ansichtkaarten / Jan Kaptein. – In: Het Baltische Gebied 2012 ; 60. p. 4-25. – Article in Dutch

After the printing data Na de drukgegevens on the line at the bottom is still mentioned: ЦЕГА ХУДОЖЕСТВЕННОЙ КАРТЧКИ Р МАРКОЙ, Price of the artistic card with stamped stamp. And that was 4 kopecks.In 1946 Rīgas Jūrmala is added to Riga as 7th district. Ķemeri en Sloka were – and remained – autonomous. In 1959 Jūrmala became a city, including Ķemeri and Sloka.

The address side of this card:

On the address side of this card is -bilingual- indicated: LATVIJAS PSR. RĪGA. PILSĒTAS PARKĀ. Also the художник (=artist) is mentioned here.

This card (and the previous one) fall under the second group: P 282-287.
Schematic: Without state arms and printing house МПФ  ГОЗНАКА

Majori is the central district of the seaside resort of Jūrmala. Below an image of the hotel ‘Majori’.

The description of the image is now placed on the image side. Viesnīca is the Latvian designation for hotel. The well-known hotel “Majori” was built in 1925 under the guidance of the architect A. Medlinger in an ‘Art Nouveau’ style (or ‘historicism’ style). In the crisis of 1932 the hotel had to be auctioned. The precious interior went partly to castle Sigulda. In 1991 the hotel was renovated.

On the eastern edge of Riga’s Jurmala lies the fishing village of Buļļi (Bullen), now Lielupe. The description of the image is now on the front.