With the introduction a regulation ordered that the cancellation of the postage stamps must be done by the number-postmark, and the date-indication by the new one-circle standard-postmark.
The single circle postmarks have only cyrillic letters (only Moscow and St. Petersburg got a double-ring-postmark).

After the withdrawal of the numerical (dotted) postmarks in 1863, the new circular postmarks were used as datestamps and cancellers.

This postcard from Vilnius-serial number 4- ВИЛЬНА (Vilna), in Lithuanian Vilnius, to Brussels (1881) has at the top the place name, under it the day, then the month in cyrillic letters, underneath that the year. At the bottom an ornament, posthorns. In smaller places the name of government came in the place of the ornament, but Vilnius (Wilna) was also the capital of the government Wilna and so it held the ornament.

On this card is  used a postmark with serial number 4:
In ’the handbook’ – Pašto Antspaudai = Poststempel in Litauen = P.O. Cancels in Lithuania / V. Fugalevičius. – second ed. 1990: of this type with posthorns also is given an image of ВИЛЬНА – 1 and 2, I suppose there must also be 3.
In this book are also images of this type with ornament without number:

The message of the card has the written dat 10/22. VII.81, 10/22 July 1881: the date written as Julian and Gregorian style. The difference of 12 days must be added to the Julian to covert to the Gregorian calendar.

The next type on the card here below – without ornament- has more information: type 6 in this handbook, type post office below and gubernia (when given) at top. Here no indication of Gubernia (type 6B).
Type 6 with date in three lines, month in cyrillic: type 6A (with gubernia above) and 6B (without gubernia).

At the bottom is now more information:
ПОЧТОВАЯ КОНТОРА (POCHTOVAYA KONTORA = Post office).
Until 1884 this was a type of post office, which served a large town, as Vilnius was, and was under direct control of the Chief Office (Pochtamt) of the postal district.
Other types offices besides the ‘Post Office’ and ‘Chief Postoffice’ were: Postal sub-office (Pochtovoe Otdelenie) and Post Station (Pochtovaya Stantsiya).

On the letter here below is also used a postmark ВИЛЬНА (Vilna)-2 with at the bottom more information, but different from the letter above. Here is the indication ПОЧТОВАЯ КОНТОРА (POCHTOVAYA KONTORA = Post office). 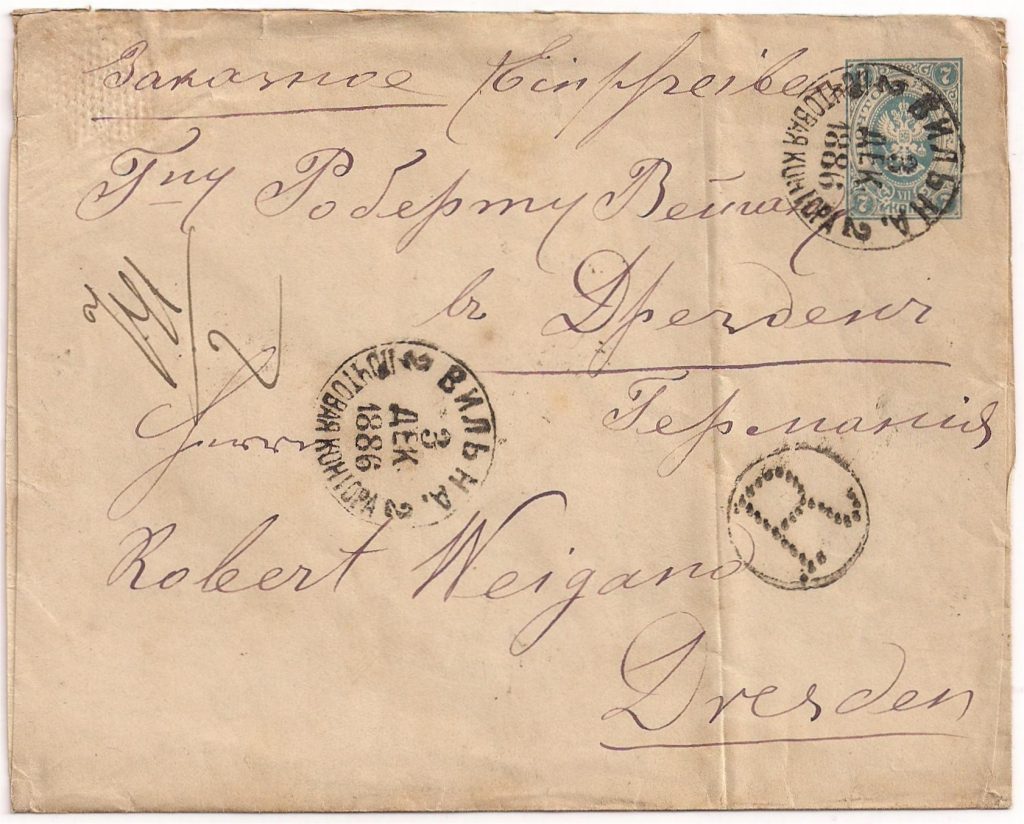 The cover here is also registered. The letter ‘R’ (recommandée = registered) in a circle is used here: for letters sent abroad . For registered letters inland are postmarks with ЗАКАЗНОЕ [ZAKAZNOE] = registered. 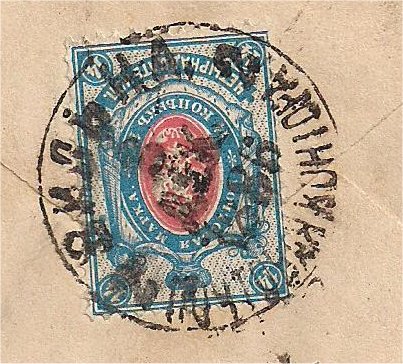 This letter is sent from Vilnius ВИЛЬНА (Vilna)-12 to Riga. The postmark gives already more information than the early one-ring-postmarks.
At the bottom is indicated:
ПОЧТ. ТЕЛЕГР. КОНТ. , the abbrevation for ПОЧТОВО-ТЕЛЕГРАФНАЯ КОНТОРА (POCHTOVO-TELEGRAFNAYA KONTORA = Post-Telegraph Office).
In june 1884 the postal and telegraph departments were united. In the beginning of the telegraph (since 1866) there were scarcely connections between the post and telegraph, but it was too expensive to let it separated.
From june 1884 there were also two new types of offices: the Post-telegraph Office (Pochtovo-Telegrafnaya Kontora), as we have seen here, for a greater city as Vilnius was, and a Post-Telegrapyh Sub-Office (Pochtovo-Telegrafnoe Otdelenie). These offices combined both services: post and telegraph.
The month in the postmark above is still in cyrillic letters and the year remains directly under the month.

On the reverse side of the cover is placed: arrival postmark of Riga and this local mail postmark.

Vilna (525 ft.), the capital of the General Government of the same name and formerly the capital of Lithuania, is pleasantly situated, with its suburbs (Antokól, Zaryétchye, Pogulyánka, and Lukíshki), on a group of sand and clay hills (820 ft.) rising at the confluence of the Viléika and the Viliyá. It is now an important railway and commercial centre, with a trade in timber and ca. 192,700 Jewish, Lithuanian, and Polish inhabitants. It contains the headquarters of the 3rd Army Corps and is the seat of a Greek Catholic archbishop and of a Roman Catholic bishop. The streets in the older parts are narrow and badly paved, but contain many quaint old churches.

The EESTI-handbook of Hurt and Ojaste is the handbook about Estonia, but the classification of circular date-stamps is also useful for Lithuania in tsarist times. In the book type 1 are the eo-philatelic and type 2 the numeral dot .
The first groups of circular date-stamps are: Type 6: gubernia (when given) at top and the type post office below. Here we can distinguish date in three lines, month in letters, with gubernia (type 6A), same type but no indication of Gubernia (type 6B).
Type 6 with month in numerals is type 6C (with gubernia) and 6D (without gubernia), the 'cross-date'-types.
EESTI = Estonia : philately & postal history handbook catalogue = Estland : Philatelie & Postgeschichte Handbuch Katalog / Vambola Hurt, Elmar Ojaste. - 1986 . - 767 p.. - With supplement 1988

In the famous handbook of S.V. Prigara is a description of these first circular postmarks from Berlin (p. 85):
..single-circle postmarks 26 mm. in diameter were assigned. Within and along the line of the circle at a distance of 1 mm were situated the place-name (at the top, with the letters 3mm. high), small, star-shaped ornaments (arabesques) at the bottom, and a date comprised of three lines in the center.
From: The Russian post in the Empire, Turkey, China, and the post in the kingdom of Poland / compiled by S.V. Prigara, 1941. - translated by David M. Skipton, 1981
On internet: via the site www.rossica.org you can go to the complete text of the book.