Alytus is the Lithuanian name for ОЛИТА [OLITA] and this Russian indication we see in the postmark.

In the postmark is indicated the government ВИЛ, short for ВИЛЬНА [VILNA] or [WILNA] (Wilna, in Lithuanian Vilnius). It is a double-ring postmark. This type postmarks is introduced by the circular no 9 of 3 february 1903. When the old one-ring postmarks wore out, they must be replaced by the double-ring type.
In the circular are also detailed intructions about the new postmarks. The place names of guberniya (government-capital), oblast (regio) and uezd (district) towns were not followed by the abbreviation of the government of region, except when it should be confusing. Small towns and villages get -as here- the abbreviation for the government or region in the postmark.

The EESTI-handbook of Hurt and Ojaste is the handbook about Estonia, but the classification of circular date-stamps is also useful for Lithuania in tsarist times.
In this classification this postmark of Alytus is type 7A1. Type 7a: double circle, with gubernia indication. In the subdivion of type 7A: 7A1: * * a etc.

Alytus is located in the western part of the government Wilno (Vilnius), near the administrative border with government Suwalki. There is also a postmark ОЛИТА ВОКЗАЛ [OLITA VOKZAL], Olita railway station, but as addition in this postmark СУВАЛК. Г. [SUVALK. G.], short for Suvalki Gubernia, Suvalki Government.

In his article about forerunner cancellation Walter E. Norton gives some information about Olita (Alytus). Within Congress Kingdom of Poland Olita was a postal relay station on the Kalwarya-Olita Post Road, about 50 km east of Kalwarya.
There is a postmark OLITA, used in 1842-1843, only town name, single line, unboxed. After the opening of the station, December 1, 1865, probably is used a red, single-line framed, box postmark, two-line: OLITA in Russian and Polish.
Forerunner cancellations of ethnographic Lithuanian territories 1800 – 1918 / by Walter E. Norton
In: LPS special issue 1968 ; XIII LITHPEX. – p. 1-26

Circular postmarks of Alytus or ОЛИТА [OLITA] according the handbook of Fugalevičius:

This postal stationary is a ‘card-letter’, now it is opened by removing the border.

In Rossica is published an article of Yu Myakota about these “closed letters” or “sekretka”: “a sheet of thick postal paper, folded in half, measuring 140 x 168 mm. It was perforated 7 mm. from the edge. A layer of gum was applied to the upper or lower selvedge separated by perforation.” In the lower detachable part was the explanation: ‘To open the edge along the perforations.’
The first cards of this type had perforation on three sides, issued 1890, according Michel K1 (5 kop. , for local use), K2 (7 kop., intercity), K3 (international 10 kop.) and K4 (also 10 kop., but also with explanation in French in the lower detachable part). The perforation lines intersected at right angles: with six tearing points it was too easy damaged. Therefore one decided to change this in a second issue: the perforations did not intersect, and rounded in the lower part. So K5, K6 and K7 had two tearing points.

The card-letters K5 upto and including K7 are issued in 1890: the corners of the perforation are not right-angled.

Michel K7 is a card-letter for abroad (value indication 10 kopecks an with the text ‘Carte-Lettre’).

The card from ОЛИТА [OLITA] is issued for inland: only the indication ЗАКРЫТОЕ [ZAKRYTOE], =closed, ПИСЬМО [PISMO], = letter.

The card-letter above from ОЛИТА [OLITA] – in the Michel K6- has the value indication 7 kopecks: the inland rate for a letter in the period. In the period 20 March 1879 – 21 September 1914 the inland rate for a letter was 7 kopecks. This card is sent to Germany: additional postage stamp needed, 3 kopecks.
There is also issued a card-letter with denomination 5 kopecks (in Michel K5): local rate.
K5, K6 and K7 have perforation 12. 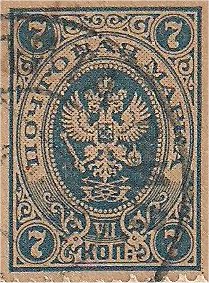 There are separated printings of these cards, distinguished by the presence or absence of a dotted backgroun in the center of the stamp.

This card has – with some resizing on the computer- clearly dots.

The EESTI-handbook of Hurt and Ojaste is the handbook about Estonia, but the classification of circular date-stamps is also useful for Lithuania in tsarist times.

Meyers Konversations-Lexikon or Meyers Lexikon was a encyclopedia, existing from 1839 to 1984.
The 4th edition, 1885-1892 is -free- online:
http://www.retrobibliothek.de/ retrobib/stoebern.html?werkid=100149

A map of the 'Russische Ostsee-Provinzen' of this edition on internet:
http://www.retrobibliothek.de/retrobib/seite.html?id=110491&imageview=true

Literature about the “closed letter”